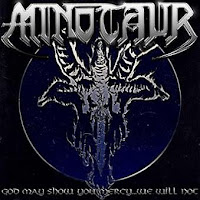 How do you feel about Kreator? Not the modern Kreator, but the old school, barbaric violence of Endless Pain and Pleasure to Kill. How you answer this question will determined your response to the latest album from Germans Minotaur. If you answered 'nay', move along because there is nothing for you to hear here. If you answered in the positive, you will probably enjoy this.

Now, Minotaur are no simple ripoffs of that other band, because they've been around for almost as long themselves. And where Kreator has moved on through various phases of sound, Minotaur has remained largely the same: blunt, brutal thrash metal which would sooner beat you up and throw you into a pile of trash cans in a back alley than attempt to impress you with sheer musicality. You won't find much different here than on, say, their Power of Darkness LP from 1988. Though the writing is primitive, tracks like "Rather Die", "Princess of Hell" and "Soulless" are sure to sate the veins of the diehard legions who venerate Pleasure to Kill, Sentence of Death and Obsessed by Cruelty.

The mix of the record is appropriately lo-fi, a nice throwback to the sounds of those early 80s efforts. Andi's vocals create a Mille-like rasp and the guitars have the meaty old tone to them. The leads are wild and used more to effect than to impress. Occasionally you've got to dig through a few mediocre riffs to get to the better parts of each track, and I found a few of the tracks like "Armegiddo" and "Damager" weaker than the rest. The album certainly succeeds in the nostalgic department, in conjuring a sound and time treasured by many thrashers. However, it is not something I will likely break out again, instead I'd rather just listen to Power of Darkness (or Kreator).