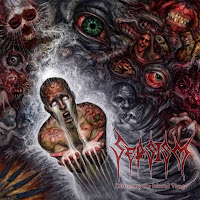 Six years have passed this California band's second album To Prevail In Disgust; but return they have, with a gut wrenching, violent exercise in carnage. I seriously felt like I had physically sustained a severe beating after listening to the 10 tracks here, and found myself wondering why more 'brutal' USDM bands can't be this good. Like peers Severed Savior, The Faceless and Odious Mortem, Sepsism is proof that something is brewing in California: a dynasty of quality bands that never sacrifice songwriting in the face of sheer aggression.

"Descend Into Sickness" opens by kicking you squarely beneath the chin as a scene of tumultous annarchy erupts around you. Choppy and technical, the band is quick to establish that THIS IS FUCKING DEATH METAL and you will find no quarter; no solace; and no friendship. "Hate Believer" thunders into being for a few seconds and then breaks out into this sick, thrashing riff below the verse vokills. "Twist of Fate" has an insane, winding riff offset with dynamic picking as it begins to grind your spine. Other killer tracks include "Cleansing of the Human Race" and the savage "Suffering the Inconceivable", but almost the whole album slays from front to end.

Distorting the Mortal Visage boasts a blunt and honest mix that erupts right into your face. You will not be getting a break on this album, so I'd advise that you psyche yourself up on whatever hyperactive drugs you own, and then wear some fucking armor, at least Kevlar before you attempt to listen. Having your head beaten in with 1000 angry fists at 60mph would be an equivalent experience to listening to this album. I loved it.