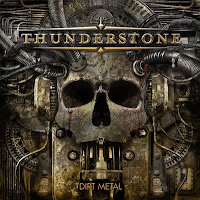 I recently reviewed the latest album from Germans At Vance, which is another band currently fronted by Rick Altzi. While his vocals in that band are more sultry and blues-based, he really gets to shine here, with a lot of balls and punch. I mention his vocals in particular, because they help save Thunderstone's 5th album from becoming a pit of mediocrity like the last four.

Thunderstone do the power metal thing, but it's got some groove and thrash influence to it, not content to simply ply the waters of melodic anthem after melodic anthem. If I said this was power/prog metal meets Pantera, I would not be lying. And it is this heavier nature which makes Dirt Metal fun. "I Almighty" is the first entry to the slugfest with some fast synths punctured by meaty mutes. It erupts into a melodic and catchy chorus. "Dirt Metal" was not my favorite track on this album, it has some big chug in it not unlike Halford's second solo album. "Blood That I Bleed" has more of these ballsy grooves in it, with some nice use of piano and bells for atmosphere. "Star" has more mute grooves, the most pure thrash track on the album, and Altzi gets to play with his vocals, doing some rasps in the bridge. "Ghosts of Youth" is a great track with some throwdown riffing and nice vocal hooks. Other kickass tracks include "Dodge the Bullet" and "At the Feet of Fools".

I wound enjoying Dirt Metal, which was a surprise since I didn't really enjoy any of the band's previous work. The album sounds great, and I like that Altzi can mix it up for his various projects, making him a worthy frontman. Again, this is not power metal like Dragonforce for fantasy hobbit addicts, it's more like the power metal you'd want to listen to while smoking a cigarette and pounding a whiskey in some dark, blue collar bar on a weeknight. There is enough grace, melody and mysticism to impress, but it's all moored in a heavy, grooving foundation. I can't say that my mind was blown, or that the title Dirt Metal really fits this material, but...