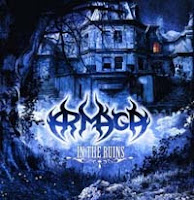 Armaga is a Russian group; In the Ruins is their debut. Here is a band performing a brand of gothic/death/doom which was quite huge in the 90s but has largely been abandoned of late. They take very simple, crunching guitar rhythms and create atmosphere with haunted house-like keyboards. Oleg Sobolevskiy has a rasp akin to Sakis of Rotting Christ, and the band reminds me a little of Ceremony of Opposites-era Samael, though not nearly as catchy. Fortunately, Armaga keep the material fairly straightforward, and do not incorporate the use of a horrible female vocalist, like many similar bands did back in the day (to get the attention which their music could obviously not earn them).

A band is only as good as its riffs, and this is where much of In the Ruins suffers. A few tracks like "Poisoned" and the atmospheric "Human Plant" manage to build a catchy yet simple, plodding rhythm, but much of the first half of the album consists of uninspired, pedestrian guitar parts with little to drive them save the vocals. The ennui is such than when the band saunters off into horror territory with "The Left Manor", and its use of whispery (King Diamond-like) vocals with the normal growls, it becomes instanly more interesting. "Shadows" and closer "Time Has Gone" have a similar effect.

The mix of the album is functional but does no service to the music. The guitars are crunchy but dull sounding, a little reverb or some overdubs might have given them more of an effect to rival the ghostlike atmosphere the band is attempting. The guitars could also use more melodies rather than handing this function solely to the keyboards. Vocals sounds okay, but again would benefit from a little more reverb. The synths are good and for most of the tracks, non-intrusive to the core heaviness of the band. I'll repeat, Armaga is doing a style that is not so common these days, and they do avoid annoying cliches, but the band will have to produce far stronger material to turn heads. In the Ruins does not suck, it does not offend the ear. It's simply mediocre, will little to no replay value. There is a lot of room in this style, and as much potential as the band wishes to put into it.