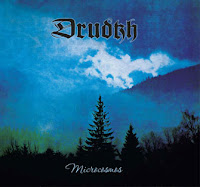 I've fallen into a love/hate relationship with the music of Drudkh. Some of his early albums (Forgotten Legends and Autumn Aurora, I didn't care for The Swan Road) are paramount examples of longing, despair, and the bitterness of a neglected musical wilderness. Blood In Our Wells was a phenomenal, career defining album which addressed and honored the past of a people we sadly ignore in today's European-hating reality. But the past two albums went in and out of my ears with little fanfare.

Thankfully, Microcosmos is both a near return to the quality of his earlier works and a progression that showcases what this band is capable of: works of emotional intensity that resound long past the actual physical exposure to the songs, and a depressive, beautiful landscape for those deep in thought. "Days That Passed" opens a brief window into the great past of the Motherland, before the epic surge of "Distant Cries of Cranes", which is 9 minutes of bliss that contains shades of much of the band's far reaching career within a single 'microcosmos'. Melodic, haunting and glorious. "Decadence" is a far more somber piece, but I enjoyed the attentive, wandering bass guitars throughout the track, and the bluesy despair it conjures. "Ars Poetica" is a darker, swerving piece with an interesting prog rock break near the end, but not one of my favorites on the album. "Everything Unsaid Before" has some moments of brilliance, but just as many moments of dullness. "Widow's Grief" is a lovely little sendoff.

The album is fittingly raw when needed, yet clear enough to capture the myriad tones expressed through the bands almost constant sense for melody. Vocals are bleak but unimpressive. Overall, I enjoyed two of the songs deeply, as well as the intro and outro pieces. The other two tracks were a mixed bag, but Microcosmos will certainly please fans of this band's previous wanderings, and perhaps pull in a few more.