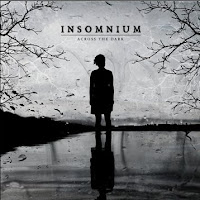 As much as Insomnium's 2002 debut In the Halls of Awaiting blew me away, I never was quite as smitten by either of the followups. This 4th album Across the Dark is the best material I've heard from the band in years, 45 minutes and 8 tracks of highly melodic death metal which follows in all the best tradition of Finn bands like Amorphis, Kalmah, and Noumena (and quite a similarity to the past few Dark Tranquillity albums).

All of these tracks have hooks, BIG hooks, and it takes very little time for them to ensnare you. "Equivalence" provides a gentle and welcoming build-up, first with its acoustics and then the flowing leads. "Down With the Sun" is like crawling forth from a cave to suddenly be faced with the song's namesake for the first time in many dark years. The riffing is circular and glorious, each progression of notes painstakingly selected to maximize the song's emotional power. Niilo's vocals are huge growls that work wonders here (reminding me at times of Absence, Elegy, Amok and other great Finnish melodeath records). "Where the Last Wave Broke" builds a nice, choppy progressive riff beneath more of the band's killer melodic lines. "The Harrowing Years" and "The Lay of Autumn" are excellent, slower pieces that roil with power. There are no tracks here that will fail to please you, even after multiple listens.

Across the Dark sounds stunning, with a dense and heavy mix that does not betray the band's penchant for sad and powerful lead lines. The vocals mix in quite well with the sad patterns of the chords, evoking both mystique and anger. This album is both a crowning moment for Insomnium and a tribute to its forebears. I'd have to say it is on par with their excellent debut, though not a surprise. The album shines from fore to aft, and has rekindled my faith in this band. As far as melodic death in 2009, this is the one to beat.