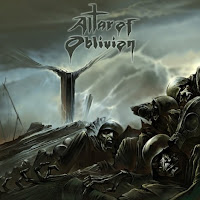 Sinews of Anguish is the debut from a Danish band performing traditional doom metal in the vein of Candlemass, Memory Garden, and other bands which combine the traditional grooves of Sabbath and St. Vitus with a modern, crushing production. The riffing on the album is pretty good; simple and effective, much like Candlemass, but I did find myself struggling at first with the vocalist (Mik Mentor) on this album. He has two styles which he can shift between. The first is a manly, gothic croon which takes some getting used to, but actually does fit the music. The other is a more cutting, nasal shift which is closer to Ozzy Osbourne. The latter style isn't bad, but thankfully occurs only rarely on the album (perhaps I am misunderstanding and this is a separate vocalist...?)

Once you get adjusted to Mentor's tone (which is, fair to say, original) you can start to settle into the band's traditional doom-laced metal. The riffs are never quite mindblowing, but they are concise, and the simple lead melodies grace them with a forward momentum throughout the hour of music here. "The Final Pledge" is a pumper of an opening track, the riffs recall Epicus Doomicus Metallicus but with more of an atmospheric synth presence. Other tracks like "Behind the Veil of Nights", "Stainless Steel" and "Casus Belli" rock hard and old school. There are softer moments like the operatic "A Retreat Into Delusions", mileage may vary on this whether you enjoy Mentor's vocals or not. The title track closes the album with 11+ minutes of epic doom, the vocals fit the most on this track and it is probably the highlight for the album.

Winter's storm on this evil sinful night
Sweeps like a torrent in these hours of darkness
Tears are useless in this God-forsaken blight
Ripe for conquest, we are wrapped in ruins

Sinews of Anguish sounds relatively low budget, but clean and consistent. The simplicity of the riffing is captured with power. The songs are decently composed for doom, and the lyrics aren't bad. Essentially, if you enjoy the sounds of later St. Vitus, early Trouble, Candlemass, or Memory Garden, and don't mind a different vocalist, this might be worth your time to check out.