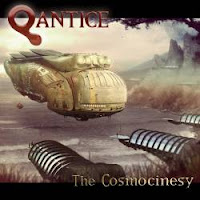 As a lover of steampunk and Vancian worlds, campy science fiction and fantasy, I was immediately captured by the cover to this album. It's not amazing, mind ye, but has a bit of that 'sky pirate' steampunk feel to it that some of you may have experienced in JRPGs, etc. Well, as it turns out this French band are actual lovers of science fiction and fantasy and so use the subject in their lyrics, which is in my opinion a good thing.

Musically Qantice are a progressive metal band with a lot of classical influence. High pitched vocal range and song structures that wouldn't be out of place on an Angra or Dream Theater album. But there is an added level of depth to this album which is created through the band's ability to use busy symphonic elements and a violin player (Yosh) that always keeps your head spinning. In particular I enjoyed the faster tracks on the album, such as "Megantrop", "The Hero That You Need" and "The Question" for their fusion of speed metal and orchestration. But some of the slower pieces like "Ocean Eclipse" or "Best in the Well" have some delightful moments.

The album has an airy, flighty sound to it through which all the guitars, synths, and violins speed and collide. This meshes well with its theme. There are some points at which the album feels disjointed, and the higher vocal range of Vincent Pichereau did occasionally grate on me. The operatic female vocals sometimes feel a little goofy, but are welcome in other places. But the depth of ideas at work here are signs of a very promising band, and if you want a more sci-fi version of Angra it may be worth your time. The concept is still fairly novel, and speaking of which, there is a French novel which encompasses the events of the character in the songs.