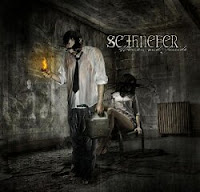 What an album title...could two subjects possibly fit together any more than Women and Suicide?

I did not think so. Sethnefer is a German band who play a driving, melodic doom with snarlish black metal vocals, and this is the followup to their 2006 debut Displeased. There is also a little hint of old school 70s/80s classic metal to their writing which feels fresh, and this provides for many of the finer moments on the album.

Personally I think this is a nice mesh of styles which has an immense potential, because very few bands write this way. Songs like "Bad, Bad, Bad Girls" and "Left Lane Bastards" rock along at a medium pace while multiple vocals snarl and growl over the top. I am somewhat reminded of other rockish death metal bands such as The Black League, Gandalf and even later Nightfall, where the tracks were all about big meaty hooks with classic, simple melodies over the top. That being said, there aren't many standout, individual tracks to be found on Women and Suicide. It's entertaining for a spin, but there aren't any moments that pulled me back in.

The production here is moderate, with big guitars whether they are chugging or driving forward with chords or melodic melancholy. Vocals are a mix of black and death, and the drums usually perform rock beats behind the scenes. Sethnefer has a pretty cool style, but I think they can write better material than this. That being said, if you're a fan of gothic rock/doom/metal with growled vocals, this might be worth your time.