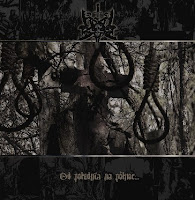 L.O.N. has been refining his creation for a great many albums since 2002's full-length debut Autumnal Night. There have been some successes among the crowd, but also a lot of average releases which hinted at the promise of much more. Od południa na północ is the long desired sound of a potential being met and exceeded, a levy breaking, and a unique force in East European metal finally coming to bear. There is not much out there which quite compares to Hellveto's fusion of fragmented symphonics and progressive pagan/folk black metal. L.O.N. takes the do-it-yourself, minimal, glorious pomp of Summoning and injects it with a beautiful complexity.

Title track "Od południa na północ..." ("From North to South") creates an urgency, a powerful meditation through walls of sound. Orchestral synthesizers clash into both harsh and clean vocals, birthing a bastard child of martial ambient and epic black metal. "The Day of Sorrow" centers around a blasting rhythm with swelling synthesizers and background acoustics. "Znak do bitwy" again conjures a largely martial vibe, graceful atmosphere with a pagan/folk sheen to the guitar melody. "World of Neoheresy" was one of my favorite tracks on the album, pianos, synths and vocal choirs build a longing climax before another windswept black metal rhythm is interspersed with proggish breakdowns. "Moc odrodzenia" fuses warlike percussion into a sweeping folk metal pattern. "Łuna" is blissfully sad, and the epic closer "Gałąź i sznur" it a slow but forceful culmination of all the elements from the album into a melodious climax.

Though still rough around the edges enough to appeal to fans of his earlier albums, Od południa na północ sounds quite level, the disparate elements of the electric and acoustic guitars, heavy use of orchestral synths, bass, drum programming and vocals all copulate with little dissonance. L.O.N. is truly developing an ear for true orchestration, a myriad of smaller individual pieces that sweep into a captivating, emotional whole. It may have taken 12 albums (and to be fair, the older albums did have some great songs), but L.O.N. has arrived at his first magnum opus. This is a revolutionary piece worth the time of any tasteful fan of black/folk, martial industrial, or pagan metal. Very easily recommended.