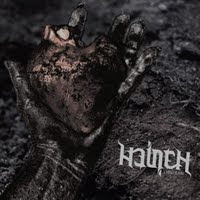 Czech band Heiden made their early mark with a pair of decent pagan/black metal albums Potomkům Pozemského Soumraku and Tinne, but have begun to diverge with this third full-length. The black, gnarled core is still intact, but there is an added flair for driving, depressive rock. When it works, it really works, but a lot of the songs here left me with little to no impression.

"Nostalgia Echo" anoints the album with walls of turbulence created through guitars. It's a brooding intro and builds some anticipation for "Catharsis", a bleak rocker which manifested thoughts of mid-period Katatonia meets modern Satyricon. It's actually a good song, I enjoyed the snakelike melodies that break up the verse riffing. "Triad" is a little slower and duller, though sufficiently desolate. "At a Funeral" centers on a simple black groove and blues melody, but transforms into a sludgy black. There are moments in the remainder of the album which I enjoyed, in particular the rocking fervor of "Post Lux Tenebras" and the grim twang of "Monomania", but even these fell below inspiring.

Obsidian does create a dark feeling through its mood and tonality, in fact the cover image captures the album's atmosphere with perfect accuracy. It's an interesting shift in direction, and I applaud the band for venturing out beyond the limits of an oversaturated scene, but perhaps Heiden will refine this metamorphosis to create a more memorable experience the next time out. Aside from "Catharsis" I found little to come back to.