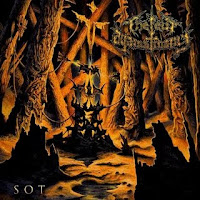 It takes quite an impressive résumé to scrape together a debut like Sot, and judging by the band's membership they have it. The Few Against Many is a collaboration between members (and ex-members) of numerous Swedish contemporaries such as Angel Blake, Incapacity, DivineFire, Demiurg, The Duskfall and others. The strength of this new project is its willingness and ability to throw away every rule in the book and re-invent itself as a brand of progressive, melodic death metal which is sure to turn heads.

Sot sounds simply staggering, with one of the better studio mixes I've heard lately. Almost every note is placed perfectly, whether it's the bouncing or churning rhythms, the symphonic touches, the leads or the bruising vocals of Christian Älvestam. Most of the lyrics are in Swedish but a few, and these exceptions were penned by Jonas Renske (Katatonia) and Mikael Stanne (Dark Tranquillity). It doesn't hurt that each of the 8 tracks and 36 minutes of this album is bristling with memorable hooks. "Hädanfärd"opens with a volley of glorious chords that switch into blasting below the sparse accompaniment of symphonic sweeps. The song simply destroys. "Bränd Mark" forces itself along a steady road of guitars with an edge of synth-laden atmosphere, both majestic and sorrowful. "Blod" chugs out with the energy of Soilwork in their prime (Natural Born Chaos), with that same sense for progression and interplay between the proggy synths and the guitar work. Other highlights include the grand thrust of the title track "Sot", the hook infested "Heresi" and the slow but powerful closer "One With the Shadow".

The Few Against Many prove that they are a class act, with an album more mature and satisfying than most of the members' past work combined (no offense intended, folks). Sot is an album that should appeal to melodic death fans who demand something different than the usual At the Gates worship. I can draw slight comparisons to Edge of Sanity's Crimson II or mid period Soilwork, but really they do little justice to what is on disc here. You won't want to miss this.

Labels: 2009, death metal, Epic Win, sweden, the few against many