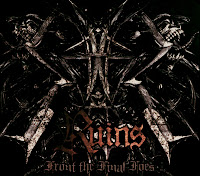 Front the Final Foes is the third full-length from Australian Ruins, a band boasting several members of Psycroptic/The Amenta that performs a more blackish style of metal. Previous albums Spun Forth as Dark Nets and Cauldron were enjoyable, but I feel a sense of power and refinement with this new album that was lacking before.

Alex Pope's vocals on this release sound like a direct, Cro-Magnon ancestor of Thomas G. Warrior (Celtic Frost). Most of the tracks move at a mid pace, but create intense, mighty grooves not unlike those on the past few Satyricon albums. "Breath of Void" grinds over you like a tank, manned by demons, its armour nicked and rusted by the constant scouring of hellish winds, traversing the abyss towards its next inevitable battle. "The Sum of Your Loss" is slower, groovier. Better. That one bent note in the breakdown is perfectly placed. "Cult Rapture" creates a mystique that transforms into a punishing blast and back again. Ditto for "Annihilate". Another great track is the concrete peeling "Hallways of the Always", a blunt, daemonic, erosive force.

The album is not just punishing for its songs, but the sound is like a hammer to the back of the cranium. Loud and well-mixed, the vocals resound over the precise guitars, turbulent bass and the ballistic drumming. The riffs are simple but the songs crush consistently, and the entire album is swathed in a violent, inescapable atmosphere. This is a strong record and well worth the time if you enjoy Satyricon, Hellhammer, Celtic Frost, and other slower black metal.