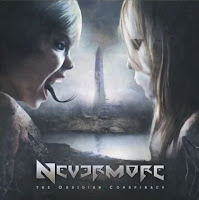 When it comes to Warrel Dane and Nevermore, I'm of the mind that the earlier work has always been the better work (whether in this band or his previous Sanctuary). There was a raw, powerful approach on the 1995 debut Nevermore that I do not feel the band has surpassed, though they have grown ever more impressive from a technical precision standpoint. Still, I'd be lying to say I didn't enjoy This Godless Endeavor or a few tracks from all the other albums, and The Obsidian Conspiracy, their 7th full-length effort, is at least a well rounded effort. You're not about to have a bucket of ice and novel idea dumped over your head after this big game, but for what it's worth, Nevermore have returned here to crafting tight, memorable songs worth more than a simple perusal.

"The Termination Proclamation" begins with an acrobatic Jeff Loomis rhythm that will have your neck in knots as you attempt to follow it through, and then a bombastic, simpler groove that slowly mounts to Dane's haunting vocal premonitions. Anchored by the guitars, which are about as fun as "Optimist or Pessimist?" from their In Memory EP, this is concrete material, provided you aren't bored out of your mind by some of the later brickhouse grooving to commence deep through the song's colon. "Your Poison Throne" flows like a river, as jarring, down-tuned string floes jettison beyond Dane's central vocal presence, often morphing into a slamming groove. "Moonrise (Through Mirrors of Death)" is a mix of Slipknot-like, faster bounce grooves with some nominal melodic thrash, and a pretty chorus, and then back to some pretty dull chug parts, so I could have done without most of it. I much prefer the wrangling assault that is "And the Maiden Spoke", a slowly brimming monstrosity where Dane shows off some of his lower range in between dreamlike, melodic vistas.

The rest of the record is a series of peaks and valleys, the measure of which will really depend on how the listener feels about previous efforts like Dreaming Neon Black and Dead Heart in a Dead World. For example, "Emptiness Unobstructed" is a very clean, professional piece with an angry side beyond its gleaming melodic summits. "The Blue Marble and the New Soul" becomes even more mellow, like some somber theater piece, the curtains about to draw. "The Day You Built the Wall" is likewise a melancholic, meaningful number with some spikes of prog rock and blues. But most of the songs combine the technical merits of modern studio thrash/power with chorus rock elements, and I find myself leaning towards the denser, compact grooves of "Without Morals" or the relentlessly hammering title track. The digipack also includes covers of The Doors ("Crystal Ship") and The Tea Party ("Temptation") which mesh in harmlessly with Nevermore's mix of modern menace, political psychosis and endless pondering of the masses of oxygen sucking human ballast.

Nevermore has a lot of clout with modern audiences for a reason. Stylistically, they stand upon a precipice very few bands in the world can duplicate, and proudly stake their banner between genres and display their fortitude in all. Their albums are always professional sounding (barring that original mix of Enemies of Reality) and fine tuned, and The Obsidian Conspiracy is certainly no exception to this policy. The compositions are tidy, the lead placement impeccable, yet so few become memorable. The band's lyrics solid and inspiring, though they might suffer from a little of the sticky 'rise up Humanity and dethrone your invisible tyrants' mess that can quickly become a slippery slope. However, even something as fresh as the unbridled energy and riff thick miasma they brought to the table in the 90s can grow stagnant after a spell, and to this extent, the album does suffer slightly. There are good songs here, surely, and in particular I favor "The Termination Proclamation" and "The Blue Marble and the New Soul", but I question the lasting quality of even these, and thus The Obsidian Conspiracy falls as yet another cobblestone along the path of 'quality' that skirts just around the forest of excellence.