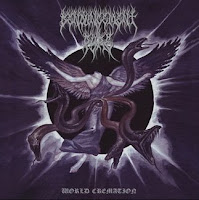 Denouncement Pyre is an Australian collaboration featuring a pair of well-seasoned veterans in extremity, with a host of others that have come and gone through the project's history. Formed in 2003, there have been a number of demos and EPs to bear this name, but not until now have we been assaulted with a full-length. If I told you this band has hosted or currently hosts members of such down under crushers as Ignivomous, Hunters Moon, Deströyer 666, Nocturnal Graves, Cauldron Black Ram, Portal, Misery's Omen, Myrddraal, and Abominator, then you'd know to expect something of a frightening, violent palette that incorporates influence from all over the spectrum of roots extreme metal, and accurately.

Today the lineup involves Decaylust (of Hunters Moon, Nocturnal Graves) performing the bass, guitars and vocals, backed by InVotan (of about a dozen Australian bands) on the kit. World Cremation is an invocation of blackened death metal with clear roots in the blasting mayhem that often lingers behind both. On the surface, the sound might closely resemble a mix of Morbid Angel, Mayhem, Bathory, Blasphemy and Deicide, and Denouncement Pyre manage to weave these influences together with precision. However, beneath the brutal pulse of their heart, lies the impact of grinding fortitude which once beat within Repulsion or Napalm Death in the late 80s. The end result is a blasphemous, unending tirade of hammering which does proud the band's constituents, and I would also risk a comparison to Angelcorpse, who successfully fostered a similar mix.

Unlike Angelcorpse, though, Denouncement Pyre is careful to measure in moments of horrific occult atmosphere into the fray. World Cremation is barbaric, but not without a few moments of careful meditation on the atrocities it is committing to your ears. Opener "Black Womb of Magdalene" transforms from the bleak, chilling ambient atmosphere of a black & white holocaust noir film to a powerful surging rhythm that recalls the force of Repulsion's "Radiation Sickness" or Napalm Death's "The Missing Link", then twisting it through the insertion of carnal black melodies. "Coven of Diabolical Prophecies" hustles with hellish force, a deep and sinister snarl granting its momentum to the grinding black punishment, while "A Banner Drenched in Blood" feels as if it crawled out of some crypt in 1993 and began feasting on the remains buried about it, ending its long banishment at the frail hands of the faith. Other tracks that slowly stiffen the limbs with a cold, venomous embrace include "Engulfed Temples" and the atmospheric "Purification".

It's good that Denouncement Pyre have so cautiously carved out their kingdom through a willing commitment to dynamic variation and speckles of grim atmosphere, because perhaps the only real fault one could occasionally point out is the sameness of many of its riffs to a large catalog of these genres' histories. They're often too straightforward, and I felt that a little stranger chord-work in the composition would have made an even more effective outburst. Still, the band do not drone on and on endlessly. The tracks are fairly compact and when you take into consideration the vocals, the honest and vibrant production, and the athletic drum work, you won't come away feeling empty or disappointed.

World Cremation serves as a natural fit for Hell's Headbangers, and should service fans of acts that show no hesitation in combining their various influences, so long as they're the products of a damnable, corrupt conflagration. Nunslaughter, Angelcorpse, Abominator and Deströyer 666 are but a few overlapping sounds, and I'd instantly recommend this band to a fan of these or many more direct artists within the bounds of black and death metal. For anyone else, its the chance to break a neck and inch further away from that final ticket to Paradise.