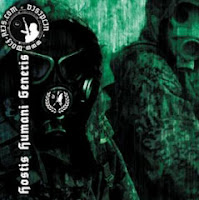 Experimentation is hardly off the radar when we're discussing Norse black metal artists. Why, just take a glimpse through the career of an Ulver, Solefald or Helheim and you'll find all manner of transitions to and from bizarre, often unexplored territory. As my last exposure to the explosive black metal band Disiplin was 2005's Anti-Life, I was not at all expecting that within 5 years, the band would make a shift into industrial metal territory, but here it has transpired, with the noisy and underhanded Hostis Humani Generis. This is one noisy record, and to some it might seem slightly off putting, but I'd urge you to adjust your headsets and listen far more closely, because this is actually quite a nice mix of crashing industrial waste, somber melodic overtones and post-everything.

At its best, Hostis Humani Generis provides the listener with a landscape of hostility that slowly unveils an inner, almost mystic beauty. This aesthetic is present for much of the album, but I found it most riveting through the early pieces like "ArioSophic Initiation" or "MithrAion". The band is pretty good at coming up with some jarring, central melody as found in "The World Trembles" which seems at odds with the crushing atmosphere of the machine drumming and suppressed vocal horror, yet rhythmically flush and fulfilling. Then, there are points at which the band delves into further into their industrial territory, such as the brilliant "Revolt Against the Modern Man" which exudes a rusted reality and nihilistic void over a grooving bass.

Other tracks still seem to grasp more of a black metal aesthetic, only fragmented into constituent elements and then splattered across the drum programming and warped into an alien byproduct. These include "Knives and Thoughts" or the hostile "Vilje av Jern". But really, despite the fact that they're all dowsed in the same caustic resonance of post-human discord, no two are exactly the same. "Weltenfeind" is this epic of calm, clean guitars ringing out hauntingly against the scream of samples and feedback while a slow beat pumps like an assembly line. "Stare Into the Eyes of Vengeance" is calming, with strings plucked against a mechanical dark ambiance with a disturbing rotor effect. "Kulturkampf" is stressful, death barks across a big industrial beat while rambling strings draw tight the psyche.

By default, Hostis Humani Generis is far more interesting than anything Disiplin have released before, but I fear that the average black metal fan will likely decry its differences more than revel in its intimate tortures, as he is won to do. Personally, I found the album enormously compelling, but the sounds are in fact quite harsh and it will require numerous spins of the listener to really delve in deeply enough. At 75 minutes, a work such as this might suffer to some sort of excess, but I really feel the Norwegians offer enough differential with each unnerving trip that it can clutch tightly to your heart like a surgical, mechanical arm. This is like Red Harvest on a massive acid binge. I truly hope this risk will pay off for the band.