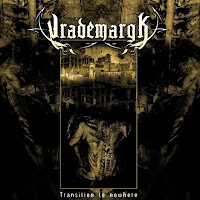 Very often the tag 'melodic death metal' in the 21st century carries with it the negative connotations of overproduced At the Gates, In Flames or Dark Tranquillity worship with an excess use of studio overdubbing, synthesizers and raunchy metalcore vocals, but there are some fresh bands out that take the original intent of the style to heart. I am not implying that all bands exploring that other path are necessarily awful, but it's good to hear a band that sticks to the very core of that genre's ethics: melodic guitar driven material with pure death metal vocals, and a little thrash influence. Instantly, such a description sticks itself to the work of Amon Amarth, Unleashed or Intestine Baalism, but there are younger bands out there attempting to carry this torch.

Vrademargk is one such act, a Spanish band who until now had only produced a pair of demos. They've now self-issued this debut Transition to Nowhere, and I was pretty surprised at the honest, punctual production here, and the carefully reined writing and performance of the band. You will not find the proggish keyboard dominance of a Soilwork on this record, nor will you find the often too-positive emotional outbursts of modern In Flames. Instead, this is a mix of decent and average riffs, with all hints of atmosphere provided strictly through the slicing guitar work. The band often lapses into extended segments of rather dull chugging rhythms, but when they pick up to the bloodied broth of older school, pure death metal trapping, they begin to excel.

"Esquerdes de Foc" makes a fine example of the bands many strengths, opening with a thick and thrashing rhythm that parts for a death metal riff as sharp as a knife, then a rolling chug which is thankfully smothered in Jordi Urbano's bleeding throat and a cautionary melody. "Fast to Hell" is pure 90s melodic thrash/death, with a pretty rich set of rhythms that burst at the seams of aggression. Again, there's a breakdown, but it's at least tasteful and brief. "A Long Way to Day" does suffer somewhat from a -core break, but the slowly plotted verse rhythms leading up to it are decent. "Graveyard of Words" and "Defying Destiny" also have their moments, and the instrumental "When Words Become Silence" has some flowing, tribal percussion and acoustic guitars below a simmering electric chord sequence that works to surprising effect.

Transition to Nowhere is not some game-breaking addition to the genre, and there are far more experienced bands out there with superior songwriting skills. However, their approach here is one that doesn't turn up so often: direct, sincere melodic death metal with accessible riffs and a good production for an unsigned act. The riffs could be a little better, and a few of the less appealing pit breakdowns removed and replaced with more intricate substitutions, but all in all this is a decent slab of death lite for gigging and trying to feel out the market.