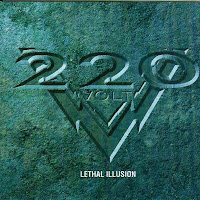 Perhaps the saddest sign of hard rock and traditional metal's state in the 90s were so many of the boring ass cover arts. Meant to be iconic, they rarely involved more than the band's logo over some metallic or larval Photoshop 'texture' background, and though they intended to make some statement of solidarity or simplicity. Looking back, this was a tremendously bad idea, since a good visual aesthetic with some effort involved is always a reliable means of imbuing your work with some durability. Maybe Metallica could get away with this on The Black Album, but for all else...well, let's just say there's a good reason you won't forget Iron Maiden's cover for Powerslave, and you will need a few gigs of extra memory to recall 220 Volt's fifth album, Lethal Illusion.

But to be fair, this was an album recorded around 1989-1992, with material that was supposed to follow up the severely disappointing, sellout effort Eye to Eye. So immediately, this album is out of place for a 1997 release, and unfortunately, for those hoping it is some return to form of the first three records, it continues directly where Eye to Eye left off. Bluesy, generic hard rock which is meant for mass appeal and radio spots rather than raging, banging heads at a live gig. That being said, I will argue that Lethal Illusion is a better record than its predecessor, because as lame as it would be that 220 Volt could not grasp what made them special in the first place, they have done a far better job of writing the songs here.

Obviously, the songs that verge on more metallic elements, even if they be in the simple melodies and chords of the guitars and feel no heavier than Great White, are my favorites here. I was not offended by "Big Business", "Disappointed" or "Lethal Illusion" itself, which are all metal lite though the flowing backup vocals and bluesy mesh similar to Kingdom Come (a band I happen to enjoy greatly) with less impressive singing. "Shotgun Sally" is basically a pure NWOBHM song, or at least could be considered so if it had come from the throat of Biff Byford and Saxon. "Don't You believe Me" is like a more reserved Skid Row, and "The Great Escape" is a slow, atmospheric ballad that picks into some tasty, driving metal which is probably my favorite on the entire record. On the flip side, there are songs like "Before You Go" which feels like a pseudo-cover of Tom Petty's "Won't Back Down" gone hard rock, or the Extreme-like boogie rock of "Chicago" which basically sucks.

I hope this record made someone money somewhere, or appealed to the small handful of fans that might have adored Eye to Eye if they were suitably lacking in good taste, because there's not much else to justify its existence. 220 Volt's metal years remain their best, and they simply were too late to benefit from the arena rock/hard rock bandwagon that died painfully as the 90s rolled on. This is a mild improvement over its '88 predecessor, and there are some moments here which are catchy and pleasing to the ear, but it would not be the disaster relief this band so obviously needed to keep their heads above water.