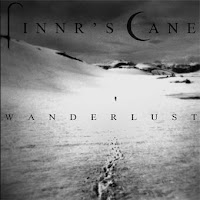 The black & white photography selected for the booklet of this Canadian trio's debut portrays a certain sense of longing for desolate, natural environments that have only marginally been marred by the presence of Mankind, and when listening through their interesting mesh of black and doom metal with environmental folk and post-rock elements, you can certainly make the connection with what the band are both thinking and feeling as they travail through the album's slow, weighted moments of melancholy and hinted darkness. This is a dreamstate given the flesh of audio, an emptiness given the body of guitars and percussion, synthesizer and the occasional cello.

It is ever the task of a band like Finnr's Cane to draw the listener in through carefully metered cycles of repetition, and at this the band succeeds. "The Healer" inaugurates the procession in tranquil morning mystery, a vibration of awakening conducted through clean guitars, a steady and subtle drum beat, and small spikes of synthesizer. It's not so much an intro as an individual song, though, because it does not necessarily flow well into the second track "Snowfall", which is a desperate, graceful shoegaze metal piece with some vocals that hover at the edge of perdition, as the chords glisten with longing sadness and very little variation is uttered through the pacing.

This is the region in which most of the record thrives, so it's the band's skill at such psychological scarring that will make or break their hypnotic grasp upon the listener. I can say with confidence that the band ultimately please the palette since they differ the momentum just enough with each new track to never quite dull you. "A Winter for Shut-Ins" is enameled in a similar fabric of despair to "Snowfall", but the added pianos create a heightened enigma. "The Lost Traveller" explores an acoustic intro fully before segueing into a slower ramble of epic Northern atmospheres, while the instrumental "Glassice" remains ponderous throughout with its gently ringing, clean guitars and subtle vibrating organ that casts a cerebral shadow.

With "The Hope for Spring", Finnr's Cane transition from their stock, crawling desolation to a surge of driving, traditional black metal. , before spirals of clean folk guitars embrace some of the louder clean vocals on the album. Truth be told, throughout all of Wanderlust, I did feel like the clean vocals could have been a little louder in the mix. I realize their intention was probably to evoke this distant hovering to the listener, but they do occasionally feel mopey. "Eternal" and the closing "House of Memory" both entail a similar path as certain earlier songs on the record, but they're adequately lonesome and harrowing.

I found that I needed a certain frame of reference, a particular state of being to let this album take me to its long abandoned pathways and oceans of regret, but once arrived, I did feel it was successful enough to suck the emotions from me like all the most depressing, ambient metal does. This is not a 'riff' centered band, and I could not point out a single guitar line on the album that serves as anything more than a vehicle for the sum of a track's despair, but really, you don't listen to an act like Finnr's Cane for such metallic virtues. Comparatively, I'd put this in sync with Agalloch's Pale Folklore, although there is less of a black metal current running through its cold waters. If you appreciate anything by that band, though, or the more wistful, sparse, drifting moment's of Opeth's lighter fare, then Finnr's Cane might support you for a spell.