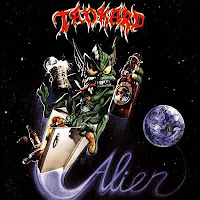 My vinyl copy of the Tankard Alien EP is perhaps the greatest gift ever given to me by a college roommate. In this case, the roommate was a chain-blunt smoking Italian who had been living in the states for a few years, and was quite surprised to find that I even knew about this German band, though his own exposure was limited to the short-player in question. What a poseur! I kid, actually, and Mr. Adriano is one of the finest human beings I have ever known, high or otherwise, and not simply because of this generous donation to my never ending adolescent strife.

On to the record itself, Alien consists of 5 tracks total, 4 of which are assuredly a treat to any fan of the band's first three, amazing albums. I'll be honest with you, Tankard 1986-1989 is a pretty monumental period for any band to have, and I have enjoyed the material from it for 20+ years, never once relenting or feeling that is has gone stale. In fact, early Tankard is one of the very few exceptions I make to my 'thrash should not be retarded and unfunny when striving for humor' policy, because there is just something so authentic and charming about a pack of wild Germans who saw Destruction, Sodom and Kreator ripping the lid off of hell or taking a piss on the realm world, and then running in the opposite direction to sing about aliens, alcohol, moshing, and did I mention that they liked to drink?

The Euro-layman humor continues with this material, the best of which would be the three unreleased studio tracks. "Alien" is a sporadic rush of speed metal wildfire with out of control riffing reminiscent of The Morning After or Chemical Invasion with lyrics about an extra terrestrial squatter who stole Gerre's food, sold off his porno magazines and most importantly, drank all of his beers! What the fuck?! Call the men in black. Not cool at all! "666 Packs" is an attempt to take the piss out of commercialized Satanic metal. Now, I'm not aware that much of this really existed...ever, but I guess I'll take their word on it, especially when the music is this fucking KICK-ASS. Note the deep sample in the chorus, and the frothing, ballistic guitar work here. Probably the best song on the EP, but "Live to Dive" does not disappoint either, a frantic high velocity tribute stage diving concert goers, especially those that are drunk and out of their right minds.

Rounding out the experience is a cover of Rose Tattoo's "Remedy", from the Australian hard rock acts' self-titled, 1978 debut. It's obviously not as wild as the new originals, but for what its worth, I had a good time with this. It's fun to hear Gerre and Tankard cover a song like this, since the attitude overlaps so well with their cirrhosis-bound rebellion. Sadly, the band have seen fit to close the EP with "(Empty) Tankard", which already appears on the debut album. It might have been a better idea to just leave this off, or include a live track or some other unreleased studio song, perhaps even one of the band's demos in its entirety, but alas...

Overall, Alien is good and worth tracking down if you're a collector or just some diehard raging German speed/thrash fanatic. If you enjoyed the riffing and vocals of the first three full-lengths, there's no way you're going to wanna miss out on "Alien", "666 Packs" or "Live to Dive", and "Remedy" is probably one of the better cover songs they've released (they've got a few on some of their albums through the years), paying tribute to a band worthy of much more attention the world over.