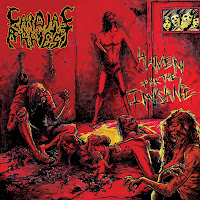 The Chicago region, and the Midwest by extension, has always been a breeding ground for some of the most violent and viscera soaked death and grind our nation has vomited forth. Urban tension? Land locked boredom...too far placed from the salt spray and fresh lobster dens of our oceans? Whatever the real reasons, we have Illinois to thank for the likes of Deaden, Fleshgrind, Lividity, and countless others. Assuming you hadn't prior to this point, you can add Chicago's Cardiac Arrest to this rogues gallery, formed 13 years ago, but only recently starting to churn consistent meat through the grinder. Haven for the Insane is their third full-length since 2006, and of the three, I'd say it best captures the bands carnal intent.

This is clearly a band with an old school appeal, yet their approach is neither cast in the typical Swedish mold nor the reinvigorated popularity of decrepit, cavernous atmospheric carnage that recalls a band like Incantation. This is more of a pure 90s USDM with a heavy influence from grind bands like Napalm Death or Repulsion, as well as the messier madness of a Necrophagia or an Autopsy. The guitars rave like a bloodied lunatic drowning in raw sewage with bags of concrete being dumped over his head, and Adam Scott's torn throat pummels with the certainty of an apex predator picking the bones of its latest prey. The rhythm section provides an adequate menace, the violent plodding of Holland's bass a depth charge counteracted by the natural and live appeal of Deabenderfer's drumming.

The riffs are not exactly original, and on their own, very few of them stand out as anything more than the weapons in the serial killer's hand, as he drags you into his fateful psychoses. Yet placed into the roiling, archaic blood haze the band conjures through sheer force, they are more than functional. The band mixes up the pace here to wisely avoid the monotony of many similar efforts, so you've got your full on grind blasts ala "Rage on...Fuck Off" or "Haunted Remnants", creepier old school death numbers like "Against Their Will", and slower themed horrors like the intro to "Affliction of the Beast" or the chugging wasteland of "Unearthly Pleasures". Personally I most enjoyed "Extinction Endured", which has a more epic quality to it through the thick racing, heavily distorted bass breaks and then the searing, evil speed death breaks near the climax that provide a happy medium between Scream Bloody Gore and Harmony Corruption.

The mix of the record is lush and raw, and the lyrics all deal with the classic themes of horror, murder and torment without the silliness of sadistic, misogynistic irony that dominates the younger generation of insatiable gore addicts. Cardiac Arrest have nothing to prove here, they simply offer a pure blast of death metal that will most adhere to long standing fans of the genre. Of the 12 tracks, there are probably half a dozen choice cuts and the rest I'd give or take, but from front to end it flows like a septic system of sincere human misery and this band one again reaffirms the Midwest as a Haven for the Insane, no holds barred aggression that flows through the veins of the extreme.