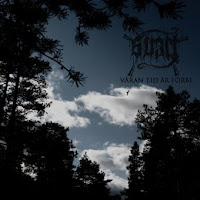 To say that much of the depressive black metal channels are superfluous with many hundreds of weak to average artists would be the understatement of the decade, and as a result I've found myself pretty choosy when it comes to the subtle strains of beautiful torture these individuals divulge from the wringing pain of heartbreak and the shadows of the world hidden beneath the obvious. Svart's debut Vanära, Vanmakt och Avsmak was one of the more professional and well composed full-lengths I've heard in the niche, concurrent with the work of an artist like Shining, and exuding enormous potential if the artist could survive the bleakness he has wrought.

Våran Tid är Förbi is the follow-up, and whilst I've seen some sources cite it as an 'EP', it is in fact composed of three tracks at over 53 minutes length, and this does not include the bonus material available via the CD edition! The idea here was to take the crushing weight and shadowy tropes of the debut album and place them in vast compositions which slowly batter the listener to a state of subdued meditation, and the tracks more or less succeed in this. I'll warn you not to partake of this album unless you find the proper mood. An evening drive in the country, a rainy night in an urban apartment, a period of decay after the latest breakup or major negative personal impact in your individual life; any of these would suffice.

But then, even in the midst of writhing regret or agony, I feel like this work does suffer near its midpoint. The opening track "Den Absoluta Tomheten" is 13 minutes long, but you do get a sense of motion being carried through the walls of churning guitars spiked in baleful melodic memories, slowly exhausting each tempo at exactly the right moment so the attention span is not lost on its current, and segueing into a number of morose, powerful stretches. All of the instruments are performed by Draug with the exception of the drumming (courtesy of 'K'), and one can only imagine the level of concentration the man must take to get this all down on tape.

As for "Mot Dödens Slätter", I really felt like this one got lost somewhere in the middle of its geography. The track is 26 minutes long, as long as full albums by many full length albums out there, and it starts off strongly with the momentum of desperation, like a thick stream of cold water across a cut wrist. It eventually adopts the passage of cleaner guitars amidst the turmoil, and cleaner voices that wail against the snarls like men singing on a river journey, and an epic slower churn akin to Bathory's Viking years. Beyond that, there are instances of added melody and the integration of alternate riffs searing across its glacial surface, and a glistening climax in which the driving metal instrumentation fades out, but around 18-22 minutes I did really start to lose my attention span.

Thankfully, the third new piece "Dessa Kedjor, Dessa Bojor" cuts off about 11 minutes for a total of 14, and this is the most haunting and focused of the three compositions, with a harrowing psychedelic intro and lumbering walls of strained melody, falling out before the 9 minute point for a lilted duet of acoustics and piano, and later creeping off into oblivion as a flute-like ghost joins the procession. Truly, of the 53+ minutes of material, I found myself engaged most by its early chapters and then the powerful closing, but might have lived without some of the excess in between those poles.

It might have placed a damper on my feelings for Våran Tid är Förbi, only the CD version by Frostscald Records does not end there. Draug and the label have seen fit to include the 2008 Då Allt Upphör, 22 minutes of excellent, vintage Svart. The swelling dark ambient regions of the "Ångest" intro are memorable, and the demo's title track begins with an excellent, pensive pattern of acoustic guitars that echo off across the whispers in this mesmerizing labyrinth of sorrow. The bludgeoning, downcast melody of "Ändlöst" and the blood-stained turmoil of "Låt det Ske" are likewise engaging, and arguably the demo as a whole is more impressive than the newly recorded material.

Thanks to this inclusion, the overwhelming majority of Våran Tid är Förbi's content becomes quite consistent in quality with the debut album, and I highly advise you plumb its haughty emotional depths if you prefer your suicidal angst in a lonely, brisk, desolate presentation with far better production than the average bedroom artist. "Mot Dödens Slätter" is an exhausting trial, but shouldn't be too bad if given the right circumstance, where most of it can be delegated to background noise in the middle of some other, cerebral activity.