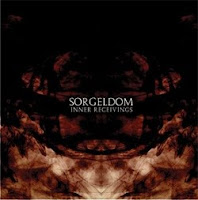 I first encountered this promising Swedish band on their debut last year, Innerlig Förmörkelse, which consisted of generally lengthy compositions around the 8-11 minute range with alternating scenes of acoustic bliss and raging, melodic black metal drawn up in a not quite polished, but not so raw it hurts fashion. While I enjoyed that album, it didn't really exist outside of a large number of similar acts that use the same shifting between folk values and native aggression, and ultimately would not stand out so far in the memory. This is only a natural progression, though, seeing that Sorgeldom was originally but an acoustic project of one sole member, Jodöden (who today performs both the bass and guitars).

The band have made a number of alterations for the follow-up, Inner Receivings, that slightly shift their formula, without abandoning their more forceful black metal core. For one, they've shed some of the rustic roots of their sound to incorporate a sheen of post-black, or shoegaze elements which often occupy a portion or entirety of the track. They also dabble in some shorter material this time out, though four of the compositions exceed 8 minutes. I found the drummer slightly more intense on this record, and the black metal rhythms far more level, though the feel of unnecessary repetition does again diminish some of the effectiveness, especially in the stretched out fare like "I Kloaken Lättar Vi Ankar" 0r the title track. The central, rasped vocals feel a little monotonous after a time, though they do fit the majority of the album's aesthetic. The band also experiment with some cleans here, though, and feature a guest in AE of Whirling.

I really enjoyed how the album opened, with a meandering mystique of jarring, glinting streams that collided in a means reminiscent of Ved Buens Ende or The Archaic Course via Borknagar, and this immediately brought about high expectations, which more or less persisted through the hour of the total experience. The longer, black metal pieces such as "I Kloaken Lättar Vi Ankar" do not rage on forever, breaking to explore segues of quiet post-rock atmosphere. In the case of "I Väntan På Telefonsamtalet", the majority of the track is not black metal at all, but a longing and desperate instrumental melodic surge of chords that both trouble and delight the ear, until the closing segment where the vocals arrive and catapult us directly into those influences I listed above. There is a cover of shoegaze band Slowdive's "Summer Day" here which is quite affectionate, and combined with the post-acoustic points of "Drömmarnas Galax" or the watery ambiance of the outro "Dyk", one can't help but feeling that this band's real strength lies beyond the metal region.

However, the juxtaposition of its extremes ensures that Inner Receivings will not dull the listener if he's in the proper state of mind to experience it, and the album ends up more intriguing than it's worthy predecessor, with more lasting vibrations emitted through its shimmering departures from the norm. Granted, the black metal gone shoegaze metamorphosis is nothing extremely original, with a wealth of European and American bands visiting the option, but Sorgeldom are fairly strong when they commit to it. Sorgeldom's sophomore is easy to foist upon listeners of Apati, Ved Buens Ende, Alcest, ColdWorld, and other acts that have helped carve out and explore this domain, but be warned that there's still a twisted black serpent sliding about the forests and fields where their imagination blossoms.