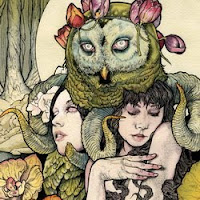 We've all heard black/punk and black rock'n'roll hybrids numerous times in the past, whether that be through Darkthrone's musings on their past few records, the hyper violence of Impaled Nazarene or the big rock grooves that inhabit the latest offerings of a band like Satyricon. There have also been a number of more obscure acts who more directly merge the two forms. But I doubt I've heard a band quite so promiscuous as Norway's young Kvelertak, who essentially take the booming, modern rock fuel of The Donnas or Turbonegro and mix in some premium grade black snarling, with occasional bursts into blasted territory or the melodic streaming of guitars that often characterize that genre.

Unfortunately, this has both its up and down sides. While it's very cool to hear that the band perform this all in Norse, and they do combine the genres very faithfully, I often felt like the black metal rushes were more interesting than the rock rhythms, which are pretty typical chord patterns we've heard many thousands of times from bands in both the punk and rock catalogs. This leads to a lopsided response on my part, because I end up enjoying songs like "Ulvetid" and the glorious, epic rolling of "Offernatt" to the more rock-inhibited "Blodtoerst", which sounds like The Donnas with Tomas Lindberg fronting them.

Still, I can access numerous places on this album where the two grow together like mated trees! "Fossegrim" sounds like the Norse band -I- with some rock infusion and a pretty evil bridge riff near the bottom, and with some of the latter tracks on the album like "Sultans of Satan" and "Nekroskop", the band knocks it completely out of the park, the punkish riffs taking on a vile illumination that was EXACTLY what I wanted to hear when I read about this band's merger of styles. "Ordmedar av Rang" also gets fairly passionate with the vocal range, and it's very cool to hear Erlend's screams right before the band will break it down to some bluesy rocking swagger.

Kvelertak is a damned interesting band, of that there is no doubt, and this is one of the brightest, most professional sounding attempts at this sort of fusion, enough so that the mix of the album captures each glinting, frenzied instrument in an almost accessible light. I am very interested to see the reaction at large to this band, because though I didn't love the songs quite as much as I'd have hoped, it's a decent debut, and should stir a lot of interest within and without of its constituent scenes, though I predict it'll make a bigger splash with the hipsters than the grims.