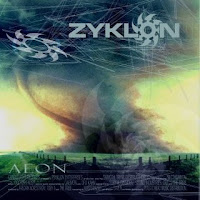 As predicted, Zyklon's debut World ov Worms would create quite a current in the extreme metal fandom of both Europe and the United States. The attention addled fans were suckers for the sort of precision aggression and technicality this band were spitting forth, and the band were able to make some headway live. The next order of business would be to create a worthwhile follow-up, the dreaded sophomore effort, and to fill in their ranks with a permanent solution to the vocals, as well as relieve the other band members of having to play the bass. Keeping the project in the family, and killing two birds with one stone, they enlisted Tony Ingebrigsten, aka 'Sechtdamon', Destructhor's mate from Myrkskog, and also of Odium, to manage the growling AND the four strings.

He does both exceptionally well, and his black/death growls seem a pretty natural fit for this band, perhaps a little bit better than Vidar Jensen's work on the first album, and I like the way he incorporates melody into the gutturals, adding another dimension entirely to the blitz of Bård Eithun's cataclysmic lyrical poetry. I also noticed a larger, welcome boost to the bass on this record which gives it more of a depth than World ov Worms, and this is really the only difference, because this is a similar combination of the death and black metal aesthetics of the debut, with brief infusions of industrial or electronic music to maintain its futurist perspective.

The album starts off like the vortex gracing its cover, with the hurricane force attack of "Psyklon Aeon", part Deicide or Morbid Angel but with some amazing leads woven through out and hints of just enough melody to make this more extreme than some mindless bludgeoning. "Core Solution" is a wise follow-up, as its writhing chugs and bleak backing melody create an immediate foundation for a concert crowd to explode, and coming after the relentless opening track here, its a good change of pace. "Subtle Manipulation" seems to throw away various opportunities, teasing with a few seconds of excellent riffing and then erupting into a pretty stock Norse black metal sequence, but "Two Thousand Years" brings it back with a complex crawl, a brooding and often droning overture of measured thunder which reminds me of the writing for the past two Morbid Angel albums.

Picture only what you're worth, in all your incompleteness
Condemnation could only be revealed through liberation
Apocalyptic as in clear-cut context
No more words needed, final result is man
As he shall ever be; striving, acting and suffering

Unfortunately, the latter half of the album rarely re-invigorates the excitement brought on by the opening moments of the album. We are instead battered with half-realized fare like "No Name Above the Names" with its pretty dull progression that we feel we've already heard. "The Prophetic Method" and "Electric Current" are all too quickly forgotten. Exceptions would be "Specimen Eruption", which at least begins with a pretty interesting, psychotic industrial thrash flow before diverging into the slower mosh segments with endless double bass formations, or the finale "An Eclectic Manner", which is probably the most introspective, morose piece on the entire album, with some pretty amazing moments in the verse and bridge that really delve into the physical and psychological wasteland cycle the band creates through its aesthetic.

There are certainly elements here I appreciated more than the debut, but the overall songwriting seems somewhat lessened. The lyrics are passable, but simply not as good as those found on World ov Worms. Love the bass tones of this album, and really enjoy Sechtdamon's performance, but it suffers the same 'half-on, half-off' feel I felt about its predecessor, with a number of inspirational tracks counteracted by 'phoned in' material that feels like a pre-tread battlefield. Fortunately the band were keeping themselves alive through some touring and an increasing spike of popularity, because content-wise, this is not quite greatness at play.