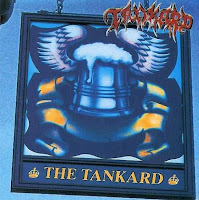 Most long term bands get the urge at some stage to release the fabled 'self-titled' album, as if it were some poignant scenario being played out that accompanies a state of renewed intentions. In the case of the Germans Tankard, they at least included a definite article. The Tankard is the seventh album from this beloved, ever surviving act, and while it's still largely a thrash effort, it is probably the 'cleanest' and most influenced by outside sources (those being rock, punk and sadly, yes, funk). It's also the first foray the band would attempt as a four-piece, with Axel Katzmann and Arnulf Tunnel departing after Two-Faced and Olaf Zissel coming on board to fill the drum spot.

This is probably one of the more difficult albums to listen to in the band's history, for while it does have a few decent tracks, several of them are utter shite, and numbered among the worst the band have ever produced. It's also so tidy sounding that at times one might wonder if Tankard had finally sobered up and tried to release some 'responsible' punk/crossover album, which no one in their right god damned mind would EVER want to fucking hear. You'd might as well wear a 'kick me I'm a poseur' t-shirt!

It's no strange assumption that the best tracks here are going to be the faster paced thrashers, but to enjoy these we might unfortunately endure the 'filler' tracks like "Atomic Twilight", a pretty stock heavy rock tune with some truly weak, uninteresting riffs that sound as if they took less than a heartbeat to compose. Hearing Gerre sing with such a melodic, 80s hard rock voice is unsettling to say the least, even though he stays on key. I wouldn't be opposed to hearing this in some other context, but on a Tankard record it sounds deflated. "Fuck Christmas" is a punk thrash tune with several throwaway riffs. Of course, it's not the first time the band has written such a track, but unless you REALLY feel you will be entertained by Gerre and the band howling "Fuck Christmas", it's not all that funny. Another unwelcome number is the funky metal of "The Story of Mr. Cruel", that's right, funk metal. "Positive" and "Poshor Golovar" also do nothing for me, with Gerre further exploring his melodic side, but at least they've got 1-2 decent riffs between them and some acceptable energy.

So we are left with the bare skeleton of decency here to sip our brews and thrash the night away, but I'll warn that most of the remainder have similar traits to the sodden, aforementioned mediocrity. I like the way the vocals weave through "Minds on the Moon", it's uplifting and the vocal multi-tracking really works in its favor. "Close Encounter" starts weakly, but explodes into some pumping, well written riffs, and the opener "Grave New World" deludes the listener into thinking this is going to be a pretty decent album. "Mess in the West" is the best of the 'fun' songs on this record, a cowboy thrash anthem which breaks into banjos and all manner of insanity, yet still keeps a tight grip on the metal elements. "Hope" is decent mid-paced thrash with some nice gang shouts and one of Gerre's more impressive flat out performances outside of his safety zone.

Had The Tankard foregone its less flattering moments and released as an EP with only this better material, it might hinge on acceptability. As it stands, there are too many black eyes and sore thumbs marring its surface, and since this is not a band of 'depth', we are left to pick and choose as if through some flea market of starving German thrash band riffs. Even when it succeeds, it is simply a pale successor to the might this band weaved through their drunken double vision on Zombie Attack, Chemical Invasion, or The Morning After, and while a cleaner, softer touch might provide for excellent hygiene at the local biergarten, it does very little for a vapid, antisocial speed/thrash album. If you like lighter speed fare like Risk or Liar, well then there's a slim possibility you will enjoy a few of these tunes. But if you prefer Tankard at their filthy, frenetic best, keep your distance.