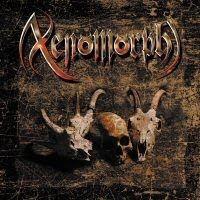 One might see the title to this album, compare it with the previous and then come to the assumption that Dutch Xenomorph were striving a little too hard to be pretentious, to stick out like a sore thumb from the massive blitzkrieg of traditional death metal surrounding them, but really, it doesn't make their contribution any less welcome, because very often these experiments succeed and branch the genre off into unexpected directions. However, considering their slightly experimental nature, I expected that this sophomore album Necrophilia Mon Amour would have diverged a lot more from the sound of the debut. In fact, it does not, and sounds like a natural follow-up, with different vocals and a better rein on the songwriting process.

You can surmise immediately upon hearing "Inside Teradome" that this will be a more focused, brutal effort. The mix of snarled and growled vocals remain; the astute, excellent bass playing, and the combination of death metal punctuality and streams of blackened chords that crash effortlessly against the beat like blood on a rocky shore. The first song here also does not throw one off by including a ska segment, though its overall quality is not exactly to die for. The second, "Neon Black Stronghold" is a pretty typical onslaught of melodic death metal: no shortage of energy, solid but forgettable riffing. Unfortunately, this formula applies to many of the songs on the album, though a few like "Treblinka" and the morose "Magnificat..." are more interesting, in particular the horrifying segue of wailing voices that provides background to the Gothic spoken word in the latter's bridge.

The title track might just be the best overall, with some predictable but effective, melodic hammering that brings the listener just to the edge of rapture before the pummeling thrash of the bridge takes over (though this leads to a nice, bass-driven sequence at around 2:20). "Samedii" and "Dellamorte Dellamore" are acceptable but very straightforward black/death pieces with a few decent riffs strewn through them, and the "In Flagrante Delictor" interlude is a nice, if brief piece of dark ambient with screaming horror samples.

I was expecting Necrophilia Mon Amour to vastly expand upon the band's tendency to think outside of a strict genre confine, but instead it runs with a few of the concepts from the debut and simply strives to perfect them. This is not a miserable album to sit through if you fancy bands like the Swedish Dissection, Lord Belial or Marduk to a fault, though it's not as sinister or effective as the greater works of that scene, and ultimately almost as quickly forgotten as the debut.