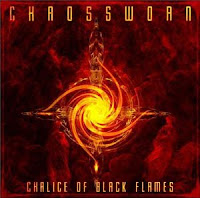 A successful union between the black and death metal formats is trickier than one might assume, despite the two styles' natural aesthetic overlap and general acceptance within each others' rabid fan bases. Often we have turned to Sweden for such transference, and bands like Dissection, Lord Belial, Sacramentum, The Crown, and to a lesser extent Marduk or Dark Funeral have all paved the way for a number of younger acts who wish to keep their sounds expansive by incorporating elements from both of these extremities. The worst of these will sound glaringly foolish as they ramble to and forth, trying to fit each mold and winding up in some awkward space that honors neither.

The best of these will simply transfuse their own creative energies with the influences of both overarching genres and transition to something personal and convincing. Chaossworn is not the 'best' of anything, but they do successfully conjure a spark of depressive, dense gloom here on this official EP pressing of their Chalice of Black Flames demo, a mellower alternative to, say, Sacramentum, with vocals that range from tearing rasps to a massive growling depth which recalls Mikael Åkerfeldt (perhaps Bloodbath more so than Opeth). Most impressively, these Swedes, who had existed for years prior as the demo level act Cryptic Death, are capable of writing a sequence of riffs that explore a multitude of downward climes and harrowing emotions without ever tiring the listener, so this is 15 minutes that might be worth sharing if you appreciate the moodier hybrid bands.

"Crowned & Winged" begins with a pattern of storm and gentle acoustic guitar presence that transforms into some heavily atmospheric, moody melodic death metal, plucking rhythms counteracted by thundering double bass and rampant Dissection-like riffs. "Bringer of Storms" emits a thick, bludgeoning wall of black conjuration interlaced with deep melodies that hang upon the precipice of the attention span, later breaking into a series of carnal verses and slower passages over which a deep, gothic narrative vocal will join in the growling. "Chalice of Black Flames" itself might mislead the listener into a 'lull', deceptively the least aggressive of the three compositions, but by far the most evil and ensnaring if you can plumb its ominous depths.

The material falls somewhere short of stunning, yet competent and well-balanced enough that it should see the band forward for a longer playing effort. Certainly I would suggest a fan of the aforementioned bands check this out, for you might be surprised. I was also reminded of a few of the better tracks off the new Watain record, which rate a similar feel of dense production and possession. There is nothing crude about Chaossworn, and they have a promising future if they can pull off some slightly more memorable fare to indulge all who submit to their sweeping, weeping black flame fathoms.