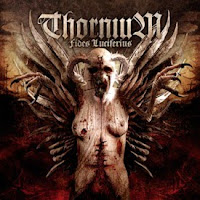 Thornium is a Swedish band which released a record, Dominions of the Eclipse, back in 1995, then took a 12 year hiatus. They returned for Mushroom Clouds and Dusk last year, and have already doubled the productivity of their 90s stint by following that average effort up with this new album Fides Luciferius. This is about as honest and straightforward as modern black metal can get. It's got a major sense for clarity in its production values. You can hear all the guitars and drums very well, and though the bass is not a major component of their sound, it hovers in the perception enough that the record gains a nice low end to it. Stylistically they don't break far out of the mold of your Dark Funeral, Marduk, Dissection, 1349 or Emperor, though Thornium does not have as aggressive or caustic a sound as several I just listed.

The rise and fall of Fides Luciferius is simply that it's a very predictable piece of black metal with nothing surprising that ranges beyond the expected. The cover image is ghastly, but uses the same angelic blasphemy and grainy texture we've seen on so many others. The tracks deal in perverse, occult explorations which are bread and butter for the genre, though titles like "Virgin Destroyer Redeemer" or "Mother of Abominations" still track across the void to my attention span despite the factor of familiarity. The riffs and writing are always solid, with nothing to really complain about, and no real boredom to ever mar the near hour's length of the album.

However, let's take for example the song "Son of the Dragon" here, which mixes up a little in its tempo beyond the straight blasterfests like "Archetype of Death" or "I Am Perfection". This begins with some acoustic tracks shining across a very simple chord pattern, a slow march that eventually moves ahead with a Bathory pace, and then the blasting begins. Not once in this entire song are you treated with anything out of the ordinary. The rhythm guitar patterns feel like they were written in all of 30 seconds, and though the vocals rasp with efficiency, and there are a few small breakdowns to make sure your attention doesn't disappear within the blasted core, you feel no natural compulsion to revisit it. A few of the mid-paced tracks feel almost refreshing by comparison, such as "The Void of Choronzon" or closer "I Am a God", but even these seem to channel a status quo rather than challenge it.

If it's purity Thornium were seeking, then one might argue that they've established a strain of sorts here. But considering their love for explorations of the occult, the ego and the alien, I feel that a more horrific, unexpected use of composition or filthy cosmic ritual would benefit them greatly. These guys can play like devils. Hands and feet grew sore in the making of this album. But glance beyond the freakish, leering cover image and you don't encounter the menace of devils, the twisted and evil riffing that can unnerve the listener and make he/she lose her lunch in despair, like the best bands in the genre. Merely a void where so much talent lies unexplored beyond the sheer professionalism the band puts into their sound. There's nothing truly offensive about this record, and perhaps that is where its necessities lie.