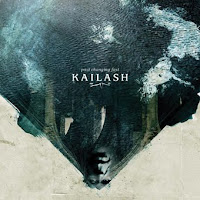 At some point, Kailash must have had some connection to black metal or metal in general, because they're one of the artists that skirt about the edge of the genre without ever truly committing to its more aggressive tendencies. The Italian duo are more likely to appeal to fans of instrumental jam-rock, though there is a reined in consistency to their writing which seems the perfect fit for an indie film score or the corner of a coffee shop, at least until the two move into their more jarring, crashing territory. I had pretty high hopes for this album, if not only for the excellent, memorable packaging but also by the stirring interest they conjure upon first exposure.

Unfortunately there are a few things holding Past Changing Fast from something I'd want to spin on repeatedly, and one of these is obvious very early on. While I'm no apostate towards instrumental bands or solo artists, I often feel that there is a certain minimum of attraction in the composition which deigns it viable to ride bareback from a vocalist. For example, were I to listen to a Joe Satriani album like Surfing With the Alien, there is enough shredding there to provide a voice which one can focus with above the rather simplistic chords in the background. With a Hans Zimmer score like The Dark Knight, the music is rousing enough that the imagination can fill in the blanks, provided there are no chorals already in there. In the case of Kailash, and many other avant-garde sludge or post-metal artists, these riffs are simply not inspirational enough that they can survive long without something else to carry the attention.

Affix this with the bands rather formulaic transitions between fluid, clean guitars that carry a light, progressive jazz influence that tangents on folk rock, and the 'heavy' parts which sound like meandering, high-brow folk metal outtakes from a band like Klabautamann or the proggier sounds of Borknagar or Enslaved, and you've got an album that swiftly descends to forgettable after only a few tracks. Mind you, the duo does not play the same riffs twice, so it's not a mere matter of repetition within the tracks, simply that you feel the formula has played out before long. Tribal hammering along with a not-so-powerful distortion cedes to a flowing, riverside jazz guitar rhythm, and at most you'll get a slightly left of center tempo explosion as in the title track, "Return to the Desert" or "Nested Thoughts".

A vocal presence might have greatly altered my attention to the details of this record, since it would then have enough ingredients to pass from the mundane snack to a gourmet meal, similar to the German act Island (featuring Klabautamann member). As it stands, Past Changing Fast makes for pleasant and harmless background listening that one might not turn towards for any other reason. The cover of Ved Buens Ende's "Remembrance of the Things Past" is an interesting inclusion, and certainly not expected, but it merges into this landscape a little too easily, providing naught but a few of the heavier moments in between the clean segues. These gentlemen can play their instruments, and they've a good eye for aesthetics, but I'd be far more interested to hear what they can offer elsewhere.