Fatal Embrace - The Empires of Inhumanity (2010) 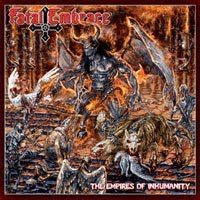 So you want to listen to some 'old school' thrash metal that isn't actually old, but you don't trust the current crop of 16 year olds out there promoting a time and lifestyle they were never actually a part of, through their patch collections and vinyl eBay auctions and grand sense of irony? Well, Germans Fatal Embrace have been performing 'retro' thrash metal since it was arguably not retro, forming around 1993 when the original scene was finally in its death throes (save for the few survivors that would bulldoze on regardless of the status quo). It's absolutely no shock that the band most resembles their Teutonic forebears like Sodom, Destruction, Tankard and Kreator (closest to Sodom of these), or the overseas menace of a Slayer or Dark Angel.

The Empires of Inhumanity is the band's fourth album in 17 years, and the band have grown into a reasonably mature riffing force. Only this time, they've got a deal with Metal Blade Records, one of the larger labels to promote the old thrash revival, and thus you could say they've been 'grandfathered' in with the younger crop, to our great delight. There is nothing astounding or original about the Germans' music, it is simply a competently executed mirror to the past, with the benefits of mixing and production standards in 2010. No, Fatal Embrace do not go out of their way to polish and over-produce their music like its a piece of the pop market, but they don't try to sound like the album was recorded in 1985 either

Much of the material the band have prepared for this release is fun, if soon forgotten, with some solid, angry riffs, wailing solos more of cause than effect, and at the center the vocals of Dirk Heiland, which seem like a mutation of Tom Angelripper, Schmier and Tom Araya, though as proven in the title track, he can also deliver some convincing death/black vocals. The question is really how much you can place aside your feelings about derivative speed/thrash and try to enjoy yourself. "Rapture for Disaster" could have just as well appeared on Pleasure to Kill or Persecution Mania, and if you seek further confirmation of such impulses, it's a fast and fitting tribute. Mid-paced tracks like "Into Your Face" and "The Prophecy" are mildly more interesting, with crisp, flowing riffs and Heiland's charismatic splatter all over the chorus lines. "Nothing to Regret" has some of my favorite, clinical feeling riffs on the entire album, and if you just want something to ball a fist to, "Another Rotten Life" feels like a composite of numerous Metallica classics being drawn up through a frothing pilsner glass.

The band also closes this record with a cover of Iron Maiden's "Killers", unobtrusive since they've already hammered out 43 minutes and 11 tracks of original content. It's a decent take, what with the major difference in the filthy vocals of Heiland. The album is well balanced, with a lot of clarity to the riffing but not making the mistake of having the vocals too far in the fore like many of the 80s records it worships. This is arguably the best yet from Fatal Embrace, though some might still prefer the heavier, blocky Tankard-on-stun feeling of the previous effort Dark Pounding Steel. It's not a great album by any means, as this has all been done and they are unlikely to displace the legendary bands that influenced them. I may not listen to it a week from now, but at least for a few hours I got my headbang on.