Interment - Into the Crypts of Blasphemy (2010) 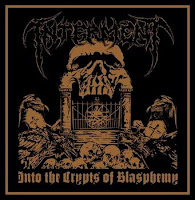 Interment is another Swedish revival act following the classic Swedish death metal sounds of Entombed, Dismember, Grotesque, and others, but the catch here is that the band actually existed during the crux of it all, forming in 1988 and producing a number of demos in the 90s before the inevitable breakup. The band resurfaced on a 2007 split with NJ old school act Funebrarum and then a compilation of the original demos earlier this year. When I tell you that 3/4ths of the current lineup are from Centinex and Demonical, with alumni from Uncanny and Dellamorte, it becomes all the more reason to get excited.

It also becomes very predictable as to what this album should sound like. It sounds like Nihilist, Dismember, Carnage and Left Hand Path, with the familiar, thick guitar tone, d-beat rhythms mixed with old school fast breaks, and vocals that sound like an angrier L-G Petrov in his youth. Thankfully, the album is largely newer material, and not just another endless rehash of the demo material, with the exception of "Where Death Will Increase" from the band's first 1991 demo under this name (they were formerly Beyond). The dark atmosphere to this album churns the grave dirt from which the dead rise when called, and I'd compare it to another recent offering, Rotten Death by Tormented, a band featuring ex-members of Edge of Sanity and others.

For what it's worth, Into the Crypts of Blasphemy does rock pretty hard, so if you sport a major hard on for its spiritual influence Left Hand Path, I see no reason you couldn't dive right into the grim sepulchers and mobile animated frames that haunt this band's lyrical universe. "Dreaming in Dead" and "Sacrificial Torment" are both excellent tracks that took me right back to around 1990, with powerful momentum and grooving rhythms that can satiate both the restless dead and the mosh pit of the living. "Night of the Undead", "The Pestilence", and "Morbid Death" are also fit for the charnel house, a dense velocity powering each swing of the butcher's knife as he hacks and maims tall corpses for short coffins.

Interment is derivative, but at the same they've got a bigger claim to this old sound than the usual upstart, as they were actually there in the middle of it all. Do you mind more of the same? If this is not a problem for you, and you treasure the Swedish roots and a decent songwriting effort, then there's no real reason for you to skip out on this album, because it hits the right notes at the right time and benefits from a morbid, crushing mix that will satisfy you. But if you seek innovation and a push of the envelope, you're probably roaming through the wrong cemetery.