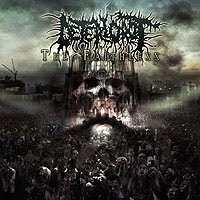 Deteriorot have always been a rather slow moving act through their 20 years of existence, but since this has always culminated in work of true quality, who the hell can complain? It's been a long nine years since the debut In Ancient Beliefs, and since this time their devout old school addiction to decrepit 90s death metal has actually become a minor rage across the world, with a number of younger bands sprouting out of the gravedirt to tango with the sounds of Autopsy, early Death, Obituary, and Incantation, but this former New Jersey band, now active out of North Carolina were well above the curve, as their 2001 'debut' was already promoting this foul platform of butchery. Beyond that, it's important to situate that the band is not just another 'revival' act, as they were in the thick of all the blood and guts so many years back, releasing demos through the critical decade of the genre.

Deteriorot also manage to maintain a distinct difference from many of the other bands currently coddling this niche like fresh afterbirth, due to their propensity for slower, crawling material as the central focus, only moving at a higher rate when distracted, and Paul Zavaleta's large vocal presence. His growling is so massive as to almost escape the mix of the instruments altogether, existing on a separate plane of the dead that somehow runs parallel with the grisly concourse beneath. Rob Solberg's bass tone is massive, and the guitars of Zavaleta and Steve Horvath are like a pure mix of Obituary and Incantation circa the early 90s, walls of necrotic force that crush with an almost doom-like impunity and simplicity. The drumming is quite organic, Davila creating an almost tribal testament to barbarity.

The riffs here are all quite simple, and very unlikely to please a listener that has boarded this sepulchral train for anything else than an annihilation of his or her hope and dreams. Tracks like "Into the Abyss of Sorrow" and "Phantoms Cry" segue from enormously awesome, if familiar death metal strains of crushing Bolt Thrower-like rhythms to sparse, cryptic doom metal, like climbing to the summit of a mountain of bones. Others, like "Beyond the Emptiness" are even more weighted and subtle, if you consider the act of slowly having your skull caved in by forces beyond your control, like gravity or temporal reality, subtle. But perhaps by favorite track on the album is "The Faithless" itself, with killer, dark melodies woven through its bludgeoning bottom end. There's also a thrifty update to the band's classic "In Ancient Beliefs" and a cover of Sodom's "Outbreak of Evil" to help round out the newer originals, and both deliver.

The Faithless is a gruesome, effective record, even if its charms have been experienced by this time through a number of other acts. Decisively archaic and menacing, it brings all the best to the table of its influences and teaches a few of the lagging younger acts what 'heavy' means, without ever taking on any hint of technicality or modern wanking. It's quite comparable to the band Funebrarum, though perhaps not quite so bleak, and worth tracking down whether you're into the original, raw artists that first delivered these sounds or the wave of recent acolytes that have decided to spit in the eye of progression. Let's hope it won't take another nine years for the third album!