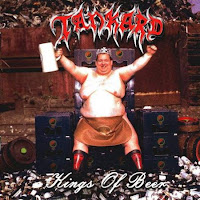 What an ungodly sight is that, even to grace the cover of a mighty Tankard album? To be clear, the agenda of this German band has always been that they give no quarter and no fuck to the trended masses surrounding them, to the glamor and good looks of sissy metal scenes, whether they be spiked and corpse painted or hair sprayed and feminized. This band is about drinking, thrashing, and catching the latest football game on the tube, and presumably returning to their normal lives, wives, children and bills, and all the other miseries which fill their hung-over days.

Kings of Beer was the band's 9th full-length album, delivered upon the turn of the century (I'm honestly surprised it wasn't called Y2Drink or something) and their second for Century Media, following the mediocre Disco Destroyer. It's pure, untainted Germanic thrash similar to their countrymen Destruction but much more likely to wind up at an AA meeting. Pissed off riffs performed at often blazing speeds, frivolous and forgettable leads, and Gerre's never aging pipes all contribute to a quick inebriated collapse unto the pavement. This album was mixed and engineered by Harris Johns, who you know from a great number of other acts like Pestilence, Blind Guardian and so on, and it's got a pretty ripping tone to it that makes it seem like a cleaned up answer to this band's later 80s work, which I happen to love, but sounds lovingly messy all the same.

It's not exactly a career highlight, but it delivers a number of kicks that make it ultimately worthwhile for any established acolyte of the band's reckless lifestyle and riffing madness. "Hell Bent for Jesus" should evoke instant headbanging from any human being that is neither deaf nor some saucy poser, with a pair of entertaining palm muted rhythms that alternate to the beat of Gerre's near blasphemy.

Yeah, that's HILARIOUS. "Dark Exile" is almost shockingly morose and serious for a Tankard tune, with a killer melodic chorus that I simply was not expecting to find here. "Mirror, Mirror" and "Talk Show Prostitute" are other decent numbers, once more with slightly more melodic choruses coming from Gerre, who has a nice reverb placed on his voice across the disc. There is an updated, thrashy rendition of the band's old demo track "Incredible Loudness" which is a huge step forward from the original. As for the rest, the quality is not so impressive; in particular, "Flirtin' with Desaster" and the goofy "Tattoo Coward" zipped right out the opposite ear, though it was fun trying to figure out if Gerre was being sarcastic with the latter's lyrics. Then there are numbers like "I'm So Sorry" who squander a good fast riff or two on some dull, rocking rhythms that have no place in a Tankard jam.

I have always had this pervading sense that these German oddities were holding back, at least since the monumentally awesome 1988 record The Morning After. The cleaner, prim and proper Tankard still sings of puke and drunkedness, but what they view as further accessibility and likely progress I feel is a bit of a devolution from their unhinged excess of the past. Still, to create such a long career out of something many would feel a simple gimmick infers that the band will mess around with sounds and producers, and a tidier, effective Tankard is not necessarily something we should scoff at. Kings of Beer is a 'good' album without being the type you should rush out and purchase, unless you are hell bent on Jes...err, collecting them all. However, it does mark a slightly upward momentum for the long laboring lushes, who would suddenly start to improve in small increments over the next few albums.