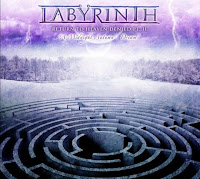 From about 1995 when they released their original Piece of Time EP through 2001's Sons of Thunder, Labyrinth were an Italian band on a mission, writing some pretty good power/progressive material for their first three full-lengths. After that, they seemed to fall off course with the s/t, Freeman and 6 Days to Nowhere. None of these were necessarily bad, mind you, but the band's decision to explore beyond the more straightforward sound they had used to break out of the underground would not necessarily reward them. Apparently this was the idea going into Return to Heaven Denied Pt. II, because it's a sequel to the original 1998 album, which in my opinion remains their strongest overall work.

The band still has much of the original lineup from that album, including Rob Tyrant, Olaf Thorsen, and the two Andreas, but the drummer is new, Alessandro Bissa, a natural choice coming in to replace Mat from Vision Divine and other Italian acts with a similar sound to Labyrinth. The cover art is similar to the original album, as well as the production and overall feel of the writing. Unfortunately, one of the flaws with the original was that the deeper you moved into the record, the less interesting the tracks would become. The musicianship and performances were not to blame, only a lack of truly memorable material. I feel like, in this way, Part II is a repeat, and since the material is just not as good in the first place, we're left without another album in which the attention span can quickly grow tired and lost. Perhaps the band's moniker is only too fitting...

The opening track "The Shooting Star" borrows the beautiful melodic lead-in from "Moonlight", the opener of the original album, and places it against a slightly different context. I was very happy that Labyrinth acknowledged this, since it's one of their best songs, but it also builds up a rather large expectation which "The Shooting Star" cannot pass. Still, the band's fluid rhythms and instrumental dominance is once again revealed, and there are a few exciting licks. They follow this one with "A Chance", which is a quite well paced melodic speed metal track with small flourishes of synthesized atmosphere, with a dreamlike segue of clean guitars and moodier vocals that mirrors the good old Dream Theater style. "Like Shadows in the Dark" makes a heavy use of piano along with its mid paced, steady escalation, with some chugging rhythms that adorn the leads.

The rest of the album continues along this very same course, all extremely loyal to the original 1998 album, with a mix of faster, energetic pieces like "Princess of the Night" and "To Where We Belong", and then the inevitable power ballad title track. Each song has notable melodic characteristics and a mix of tempos, with plenty of ground in which Andreas de Paoli can wander. Tyrant has a generally good performance on the record, though there are a few points in which he shifts to a more girlish pitch that sounds a little too over the top. The major issue is that the album really doesn't ever go for the throat. The songs are all tidy and perky enough to gain your attentions, but most of the actual riffs themselves, both guitar and synthesizer, seem familiar and safe. The leads are crafty throughout, but I can't help but feel they are more about the 'exercise' of inclusion than emotional outbursts.

If Labyrinth just wanted to re-establish themselves to the standards they set in their career through the mid to late 90s, then Return to Heaven Denied Pt. II does exactly that. The original was my favorite album, and I still listen to a song like "Moonlight" today, a welcome addition to any prog/power mix I'd pass along to a friend. Unfortunately, there are no songs quite at that level on this recording. As consistent as the band is, nothing really leaps off the sonic screen here to engage you beyond just a pleasant, inoffensive album of its nature. I was very excited that the band were coming out with this, but I don't feel it's all that much better than the last few efforts. I guess I'll just have to wait for the inevitable Sons of Thunder Pt. II...