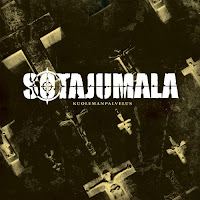 If you've missed out on this band's prior efforts Death Metal Finland or Teloitus, then you've missed out on a pair of the finer Finnish-spun death metal efforts of the past decade. Sotajumala (i.e. 'Wargod') can not be a band accused of creating anything drastically original for their immediate scene, but the fact that they stick to the native tongue does mark them as somewhat of a novelty across the English dominant linguistic strata that is death metal music. But as far as their capacity to craft effective rhythms into a punishing, polished force, they stand alongside many of the Polish bands like Behemoth, Vader and Decapitated. In fact, Kuolemanpalvelus reminds me as so many others do, of a fine mixture of Vader's more mid paced crushing with the savvy and swerve of Morbid Angel, with a splash of Deicide in the chugging and dual snarl-grunt vocals that often erupt here.

No surprise that I find the band's best moments on this album to reside in the subtler context that aggregates during the middle of some hammering juggernaut of double bass and rolling tank tread palm mutation, as for example the mellow, haunting patterns that lurk beneath the bridge of "Kuolleet, toinen jae" or the shrill, screaming lead work that drills the cranium astride the lax breakdowns deep within "Sokeus". But there are numerous death metal blitz assaults like "Sinun Virtesi" that reach directly for the throat, pull it up and out the mouth and then trample it with steel tipped boots. The squealing, dirty grooves that dominate "Luut sinusta muistuttaen" remind me in a good way of the pummeling, strange Morbid Angel effort Domination, and the drawn out epic title track promises 15 minutes of twisting and turning through stretched and repetitious mechanical metal grooves and flashes of more inspiring speed.

Yes, it's all been done. Only not in Finnish...and Sotajumala have a nice propensity for wrapping things up in a consistent, cold gloss that should prove effective in both the pit and the angry, broiling thoughts of the listener to whom the record offers just a little incentive on getting by in life. Kuolemanpalvelus is not an album I will reach for immediately when in search of stunning riffs or ghastly brutality, but it provides a solid longform play that should not discount or disappoint the followers of their previous output. Again, best recommended to anyone who would enjoy Morbid Angel (Blessed are the Sick, Domination, Gateways to Annihilation) with Finnish lyrics, or the modern Polish bands who show a similar ethic in balancing aggression with actual songcraft, and not just chugging, dull pig squealing mayhem.