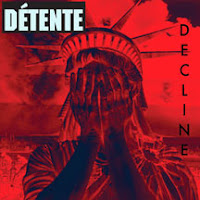 It's a given by now that almost every thrash and speed metal band from the 80s has already gotten back together to promote new material and ride the latest wave of the genre's revival, but this is not necessarily a bad thing, if the seeming immortality of the style has somehow inspired its original practitioners to new heights and shown them the error of their ways in abandoning it. A lot of these reunions were expected, since the original lineups were still floating about, many in newer metal bands of various styles, but there are some that I really would not have bet money on. L.A.'s Détente falls into this category, for the major draw to this band in its 80s incarnation was the astounding, angry vocal presence of Dawn Crosby, who died in 1996 in a time fronting Détente's follow-up band Fear of God.

Being that 24 years have passed, and Crosby is no longer with us, an album of new material was probably the last thing on the minds of the avid thrash collector. However, there has been some buzz about the possibility in recent years, and for a time, Ann Boleyn (of Hellion) was rumored to be taking the helm, and did some touring with the band. Despite any doubts, here we have Decline, the long...awaited sophomore studio album from Détente, and the band have recruited an aggressive new vocalist in Tiina Teal, and though she's not quite the equal of the cult legend that once fronted this act, she at least has the chops to measure up against the actual music.

Teal basically spends her time between two vocal styles: the higher, angst pitch which is closer to Crosby, or Sentinel Beast's Debbie Gunn, or the classic rock band the Runaways (as in "Cherry Bomb"). For the rest of the time, she's got a more wretched, snarling vocal which is more akin to Karyn of Crisis or Sabine's pissed off vocals in Holy Moses. Teal spends a lot more time in the latter category, often scaling up to the former, but while I don't think she is always on fire, note for note, she's not so bad once you've adapted to this slight deviation from the past.

The remainder of the band is culled from the classic Recognize No Authority line-up: Dennis Butler drumming, Steve Hochheiser on bass, Caleb Quinn on guitars, and its surprising just how much the songs sound like pure 80s material, not far from the debut album if a little more pissed off and technical. These are all new tracks, mind you, so it's not as if the band just wrangled up their demo material (they released a few after the Recognize No Authority) and re-recorded it all to turn a few bucks. They've got a pretty pure California/Bay Area presence similar to Holy Terror, Vio-Lence, Hirax, Forbidden, Defiance and a few other bands, but unfortunately the actual quality of the songs is where this album comes up short.

There are riffs aplenty, in tracks like "Predator" or "Genocide", and they pop and crunch as closely to the source as most retrofit thrash bands could ever come, but unfortunately the riffs are never the variety of jaw-dropping durability that would make one want to continuously loop the album. Gang shouts are delivered with aplomb, and there is an undeniable, bristling energy here created by the mix of Quinn's direct, confrontational tone and Hochheiser's thundering low end, with Butler doing a fair enough job of keeping the overall flow powerful enough to contend with the youngsters. None of the songs are offensive, and though I prefer Teal when she's in her higher range, some of the better material ("This is Not Freedom") seems to occur when she's snarling like a cat that just had its tail clipped off.

Decline could have been a disaster, but thankfully it is not. It's an average thrash metal record with a lot of speed and anger, and loyal enough to the past that most fans should not find themselves too pissed off (even the cover aesthetic is similar to Recognize No Authority). Now, the chance of me ever wanting to reach for this above its predecessor is slim to none There are no tracks here at the level of a "Holy War" or "Widows Walk", but it's pure speed/thrash, and Détente and their new singer have taken pains not to embarrass themselves like a number of other veteran reunion acts.