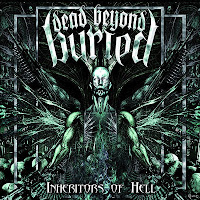 London's Dead Beyond Buried stand in a pretty interesting place when compared to the massive landscape of the latest death metal fashions and waves. They are neither unflinchingly old school, like the sounds so many come lately's have dredged up from the early 90s, nor are they mindlessly indulgent in technical overkill like so many of their modern peers. Instead, they dwell in that honest realm somewhere between the poles, where a bunch of guys just write some death metal and let the music speak for itself. To consider this a 'young' band would be misleading, as they've been in existence well over a decade, becoming active enough in the past several years to begin releasing full length efforts. 2007's Condemned to Misery was a worthwhile debut album, if nothing earth shatteringly inspirational, and they seek to capitalize here with the follow-up Inheritors of Hell.

This is a diverse record, and I say this because the band is fully able to manipulate threads of driving, undead evil riffing in the vein of Morbid Angel, atmosphere that rises above any mere tribute to the classics, often interesting choices in chords and brief, sporadic flights of taut, mathematical articulation. As with fellow British bands Mithras and Dãm, they actually do their part in delivering something thoughtful and 'fresh' to the very often stagnant scene in which they find themselves. This is violent and often explosive material, but far from the chug chug pig squeal chug and songs of torture porn, rape, molestation, and horror camp that most of the bands at the bottom of the corpse pile exude as they ceaselessly try to claw above one another through shock tactics. DBD mean for you to take their music seriously, and they accomplish this with savagery to spare.

That's not to say they are 100% unique, and in part they've built their empire on the backs of the tried and trued methods of 90s death metal like Morbid Angel and Suffocation, and in addition I find their songwriting as tasteful as some of the Polish bands like Behemoth and Vader. At the cutting velocity of "The Overcoming" or "Inheritors of Hell", they ramble at a relentless pace with voidscapes of caustic chords hovering off into a schizoid nightmare. But they're honestly more interesting when they wander at a more accessible pace, such as the twist and crash of "The Many Names of Nothing" that can spin from a rapid fire to a cautious meandering. "The Last War" begins with a morose, atmospheric alien blues vibe before picking up to an Azagthoth/Sandoval equation. Other favorites here include the thundering "Funeral of the Cursed" and the crawling blockade of complex mosh rhythms that occupy "A King Amongst Slaves". Some truly sick riffs in that last one!

The vocals are a mix of hoarse growling and uncouth snarls, and often the latter can grate on the skull. There's a wilderness here reminiscent of another English band, Anaal Nathrakh, and their DIY approach to self recording and violent bursts of raw industrial-tinged testosterone. I clearly preferred the lower pitched vocals, but then that's just a part of my subliminal programming due to many years of Morbid Angel appreciation, and really the center of focus here is the riffing skill of Michael Lee and the engaging drums of John Biscomb. Really, though, Inheritors of Hell is something that could breach a wide swath of death metal fans, from a more technical inclination to the progressive and, to an extent, lovers of the 80s and 90s forefathers who were pushing at the boundaries of the form. This is every bit the equal of its predecessor, and features a nice home brewed production which, unlike much modern death, does not suffer from any excess of brutality-pruning polish.