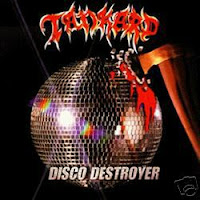 After a long and 'fruitful' contract with the legendary Noise Records drew to a close, Tankard were snapped up fairly adroitly by the new hotness in metal labels for the 90s, Century Media. This was long before the label sold its soul down river with many garbage signings to turn a profit in the 21st century; about the most offensive band they had was Stuck Mojo. So Tankard, a band with enormous experience behind their bursting beer-gut belts was a pretty safe bet, at least to push a few thousand sales to their already installed, inebriated fandom.

Unfortunately, despite the clever title and some well meaning on the part of the band, this was not really the new Tankard album most of us were probably hoping for. When approached from certain vectors, there are spots on this huge Pilsner glass of inconsistency which shine with the fresh drops of brew, and to be fair most of the material is faster paced and silly, signatures of their immortality, but even the better songs found here are fairly week when compared to a large host of better efforts in this band's catalog.

Humor is ever appropriate with Tankard, and they are one of the few such bands I support with any regularity, so the potential fun of songs titled "Hard Rock Dinosaur" or "http://www.planetwide-suicide.com" is not lost upon me, but the songs themselves do not exactly live up to the same level of memory as their monikers. Basically these are your basic happy punk anthems played at faster speeds with a little bluesy hard rock groove shuffled in to get the floor moving. Neither of these things is 'alien' to Tankard, but here they fizzle out into forgettable tripe. Other songs like "Another Perfect Day" and "Death By Whips" have even poorer turnouts, and it isn't until later on the album that we get some half decent tracks like "Away!" or "Tankard Roach Motel" that feel like banging and drinking our faces to. "Disco Destroyer" itself is really fucking week, gone in a flash with nothing to offer but a violent threat upon the lives of a genre of music that had LONG since disappeared...at least the 'real' disco.

Should this album not have been titled Pop Punk Destroyer? Dock Martin Destroyer? Grunge Destroyer? Surely disco was no longer a threat by 1998. However, metal bands continued to rally against it as an in-joke, one that someone, somewhere must have been laughing to. Myself, I like the title of the album, but without much in the way of great music to force my kidneys into groaning and libido into awareness, I'm afraid this would not drive me to drink.