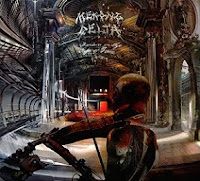 After a decade of silence, Mekong Delta returned in 2007 with their highly recommended comeback album Lurking Fear, and alongside the recent streak of Paradox records, that made for quite an exciting kick to the German technical thrash pacemaker, not only sounding like the band hadn't skipped a beat, but also trumping a number of their 90s efforts. Well, apparently this was not a one time thing, as the band have forged on yet again to create another studio effort, Wanderer on the Edge of Time, and though it's not quite so exciting as its predecessor, this new effort proves there is still life left in the genre, or rather, creative, and puts so many of the young run and gunning 80s worshipers to tremendous shame.

Lurking Fear was a pretty tight knit, manic thrash album which celebrated the wealth of idea distributed near the end of the 80s by the more artistic and technically inclined bands of that genre. To an extent, this continues along that path, with acrobatic guitar work and amazing bass lines that absorb you into this band's continuum of classical music, jazz and metal. Similar to previous Mekong Delta albums Pictures at an Exhibition (1997) and Dances of Death (1990), several of the thrash tracks are separated by classical or experimental segue pieces, all laid out like some forsaken symphony. This is a technique which has often proved divisive on albums like Blind Guardian's Nightfall in Middle Earth or Pestilence's Testimony of the Ancients, as some listeners are unwilling to grasp the underlying assumptions which mark each transition. Like those albums, I feel that they are largely successful here, and provide a pretty broad experience which is more than simply a head spinning exercise in aggression.

Of these, I enjoyed the intro "Concert Guitar", a subtle and fluid, classical guitar piece which meanders through several veils of mystery. "Interlude 4 - Group" and "Finale" are both impressive pieces of clinical, dexterous thrash with an intense junction of drumming, bass and strings, no mean feat when you consider that almost all the members except bassist Ralph Hubert have only been in the band since 2008...though drummer Alex Landenburg has played in At Vance, Axxis, and Annihilator previously. Speaking of newcomers, the vocal reins here have been assumed by Martin LeMar (of German progressive metal act Tomorrow's Eve), and while he's got a less vibrant and 'insane' tone than Leszek Spiegel, and a safer approach more likely to mirror someone like James LaBrie of Dream Theater, he is still spot on for much of this album.

Though a good portion of the record's 50 minutes and 15 tracks is devoted to such intros and interludes (themselves ranging from thrash to classical), the true meat of the matter are the vocal pieces, and several of these are remarkable. "A Certain Fool (Le Fou)/Movement 1" is a weighted, prog rock effort which slowly gathers in power through swelling, theatrical orchestration and a poignant but reined in performance from LeMar. "The 5th Element (Le Bateleur)/Movement 2" continues to increase the intensity, almost like a bridge from Movement 1 into the stuttering insanity of "The Apocalypt - World in Shards/Movement 3", which is one of the most climactic motions on this record, sure to sate the fan of progressive thrash metal from the late 80s/90s such as Watchtower, Deathrow, Psychotic Waltz, Fates Warning, Paradox, End Amen, and of course....Mekong Delta themselves in their earlier incarnations.

Other highlights include the rising mystique of "King with Broken Crown/Movement 4" and the serpentine, shifting riff-banks of "Mistaken Truth/Movement 7". "Intermezzo/Movement 5", the longest instrumental piece on the album should certainly dazzle the un-initiated among younger fans, who probably think this style was created by Vektor in the past 2-3 years. The one centerpiece of the album I did not find myself absorbed within would be "Affection (L'Amoreaux)/Movement 6", which is a softy, developing ballad with backing vocal harmonies and far too many 'good vibrations' for this listener. Otherwise, I felt myself diving right in!

Ultimately, Wanderer on the Edge of Time is not such a frenetic wake-up call as Lurking Fear was, but my attention rarely waned as I was listening through its contents. Nothing really drags, the musicianship is top notch, and the material accessible enough that it might reach far beyond the cult tech-thrash niche and found a fanbase among the more common progressive metal fans. Hubert has kept this entity alive and fresh with ideas, as well as a cadre of younger musicians who somehow manage to keep Mekong Delta's vision alive without descending into the mundane practices of so many of today's younger thrash metal upstarts. If you're a fan of any of this band's previous works, or of any of the bands I've name dropped above, then I sincerely doubt you will be met with disappointment.