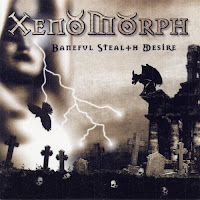 The Netherlands have long been a sanctuary for death metal bands living on the edge of their genre, forging new ideas out of an orthodox past. Primary examples of this include Pestilence, who initiated a transition through progressive metal and then ultimately jazz on their 3rd and 4th albums Testimony of the Ancients and Spheres. Another name I will evoke is Phlebotomized, known for the uncanny orchestration, and use of synthesizers and violins in their sound. More recent than either these is Xenomorph, named for the creatures in the Aliens film series, who formed during the death metal boom and released a number of demos, finally culminating in a deal and this debut Baneful Stealth Desire.

Xenomorph is not quite so experimental as the above mentioned bands, and yet they let slip a number of interesting twists and turns on this debut which place them outside the sanctity of pure, traditional death metal. For one, the riffing on several of the songs is a mix of black and death style, and the vocals are the very overbearing mix of grunts and snarls you hear in a lot of modern grind or metalcore bands. Now, this is not a constant, and though I don't particularly enjoy the vocals, they're not quite so bad to spoil the experience. For another, the band throws out a curve ball in a number of tracks here. "Dragons Breath" includes a polka/ska segment at around 1:30. "Bestia Infernali" boasts some filthy, almost guttural rock vocals in its depths. "Last Contribution to Art" ends in with clean guitars that segway into an escalating choir vocal.

Of course, none of these are absolutely crucial elements, and one develops the feeling that the band is somehow, desperately trying to distance itself from its peers, though there's not much of a point, since the vast majority of this album is fairly straightforward, faster paced death metal. At the heart of the beast are a series of clinical sounding riffs that remind me of Pestilence on their first masterpiece Malleus Maleficarum. You'll find these on "Blood of the Stars" and "Bestia Infernali", specifically the opening riff onslaughts. These happen to be my favorite songs on the album for a reason! I also enjoyed "On the Most Blackened Wings", which is largely a melodic black metal track reminiscent of Swedish bands like Dissection or Lord Belial. The closer "Once Upon Armageddon" is also suitably chaotic, with some female guest vocals during the surge of the bridge, alongside some titillating, eerie backups.

Unfortunately, that only accounts for about half the record, and the remainder is not all that special. "Post Human (The X-Morph Deathcult)" and the thrashy "Storm Innocent Eve" went straight through my ears, while "Dragons Breath" really does not benefit from that ska section. The vocals throughout range from acceptable to kind of annoying, though I do appreciate that the band were trying to create a schizophrenic painter's palette. The lyrics are interesting and desperate assaults of poetic madness, though their success rate wavers, and the production of the album is pretty top notch to capture its raging melodies, especially the bass guitar which sounds superb on the entire album.

Baneful Stealth Desire is certainly not your 'norm' record, even the title warned of that. Yet its eccentricities do not stack up to an entirely memorable experience, and I had the impression that it needed more time to gestate. Still, after 7 years it was positive for the band to finally break out a full-length album, and the band do succeed at conjuring an atmospheric blend of death, black and thrash metal with some added 'perks', holding a possible appeal to fans of melodic death, progressive death, or melodic gothic/black metal simultaneously.