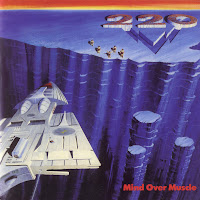 I can probably forgive the world for letting 1984's Power Games come and go with little fanfare. That was a busy day and age for metal music, what with bands like Iron Maiden and Metallica exploding in popularity. It was a very good record, and ample evidence of a rising force in the Swedish scene (pun intended), but it didn't quite stand above what a lot of other acts were offering at the time, so into the bowels of history it would go, until nostalgia could pluck it forth once again. What I cannot forgive is that the subsequent album Mind Over Muscle received would also receive so little love or attention! Truly this is the apex of 220 Volt's output and one of the better pure Swedish metal albums of the decade!

There were a few aesthetic tweaks to the band with this album. The most obvious is that the band ditched the whole 'sexy female hand wielding power device or control while adorned in cut off leather glove or studded wristband' thing they had going on, and went with a good old SHMUP-style spaceship scene! Some might think this evidence that the band were verging on a more progressive sound for the new album, but that's now how it turned out. Another change was the addition of Peter Olander, after the band parted with guitarist Thomas Drevin (he would later return to the fold in 2002). I'm not sure if this change had any direct impact on the writing, or how involved Olander would be in the writing, but clearly something went right, because this blazes trails over the previous two albums.

Wanna know why? Well, for starters, this is a far more straightforward melodic power/speed metal album, with most of the hard rock elements of the past works consigned to oblivion. In my opinion, this shift holds a greater attraction, and the songwriting, which was already going strong on Power Games, is considerably improved once more. There is a more serious attitude to this record that does not entirely abandon the band's skill at vocal hooks and big fills. Jocke Lundholm is enormous on this record, and he has shed all of the roughshod, inexperience of youth to develop into a force to rival Joey Tempest. The riffs kick ass almost the whole way through the album, and this would easily appeal to fans of modern power or traditional metal more so than anything else in 220 Volt's catalog.

Everything about this record is bigger, longer, and harder...and it maintains an immense level of quality across most of the 12 tracks. "The Tower" erupts from a brief segment of churning feedback, with a driving freight train rhythm somewhere between Saxon and Exciter. The chorus is excellent, with some simple classical shred to elevate it beyond the vocal climax. "In the End" coils and grooves almost as if it were a Mercyful Fate/King Diamond track, with the obvious difference in vocals, before a glistening, hard rock groove in the chorus that is impossible to resist. "Electric Messengers", "Whiter Than White", "Blessed by the Night", "Touch of Fire" and "Halloween" are just five more thundering reasons why the album should have blown up the charts, and if you somehow miss the band's hard rock sound from the debut, well they've got you covered with "Mind Over Muscle", though I'd argue it's the weakest song here. If you can get your hands on the Metal Rendezvous re-issue from 2001, then you get two great bonus tracks: the superb, working class metal of "High Heels", sure to sate a Dokken or Europe fan, and the fetching, memorable "Dreams" with some tasteful speed licks and enormous vocals that almost verge on The Cult.

Mind Over Muscle is absolutely the FIRST record anyone should listen to if you're interested in 220 Volt, because you will be unable to look back afterward unless you are a massive anti tool whose cruel irony and lack of spirit leeches the metallic content from all of our blood. Half the songs on this album are perfect for cruising with the top down, throwing horns on the highway or just razing your arms through the wind itself. Enthusiastic, powerful and impressive, it's a long hidden gem of a near forgotten period in one of the world's largest metal markets.