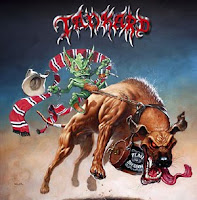 German alcoholics Tankard have long been a personal favorite of mine, one of the few lowbrow humorous thrash metal acts to have survived the ages intact without losing their edge of humor. This is not to imply that their musical record is spotless, and while I worship the band's first three albums, their output since that time has been inconsistent, tending to roll back and forth in quality like an endless stretch of hills, covered in hops & barley. From time to time, they will release an album that guides your nostalgia straight back to their early days, and 2004's Beast of Bourbon, their 11th full-length album, does exactly that. More or less...more than less.

Essentially, this album represents a dialing back of the years to The Morning After era (one of my favorite Tankard albums), only it adorns a modern Andy Classen mix that closely resembles the relentless power of Destruction's amazing 'comeback' album The Antichrist (which was not recorded by Classen), or Ritual Carnage's I, Infidel. So what you have is a whole lotta songs that sound as if the band is once again primed to break into the chorus of a "Commandments" or "Shit-faced", only these are all new tracks worthy of fist pumping and liver murdering mayhem. It's a lot like the previous album B-Day, only more brash and angry, and retains the same four-piece lineup the band had held since 1995's hedonist statement The Tankard.

The only real thing holding Beast of Bourbon back is that several of the tracks feel very repetitive of material from the previous album. "Under Friendly Fire" seems like it could be a "Notorious Scum" or "Rectifier Part II", and "Slipping from Reality" and "Genetic Overkill" don't fare much better. None of these is a task to listen to, mind you, and if it's mindless headbanging momentum you seek, they all deliver, but I just didn't connect to any of the riffs. Once we drink a little deeper into the record's cups, we encounter some more intense fare like "Die With a Beer In Your Hand" and "The Horde", both benefiting from some slightly catchier rhythms. For almost the entire remnant of the album, this level of quality holds, though a few tunes slightly deviate from the course: "Endless Pleasure" is moodier and the vocals more melodic, and the delightfully perverse "Fistful of Love" has perhaps the best riffs on the entire effort, if you can manage not to laugh to death at the lyrics. "Alien Revenge" also rules.

Personally, I did not care much for the Cocksparrer cover bonus track "We're Coming Back", but it seems a suitable biergarten anthem for the less discriminating Tankard maniac. Andy Classen did a pretty outstanding job with the production, as it really creates this crashing, loud atmosphere that never diverts from the fluidity of Andy Bulgaropulos' endless cask of riffs. The musicians once again impress with the amount of energy they dispatch here, and Gerre entertains with his usual wasted-Schmier charisma. I can honestly say that Beast of Bourbon is one of the better albums of the 21st century. Of course, almost any Tankard is better than the leagues of alcoholic thrash wannabes that have sprung up since this album, but here you've got the riffs to match the attitude, on most if not all of the individual tracks.