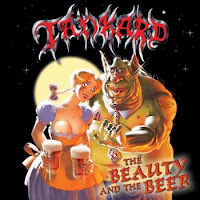 The cover art to Tankard's whopping 12th full-length album may not be the most flattering, or THE most flattering, unless you're some pitiful fan of all things Disney Pictures have animated in the past century, hanging tightly to your innocence. However, it matters very little, because even the most skeptical witness will be blown over by the amount of effort the band obvious put into this one. Make no mistake, folks, The Beauty and the Beer is the best Tankard album since the 'drunken trinity' that kick started their career. It puts almost all of their albums post-The Morning After to shame, and while Beast of Bourbon was surely leading up to this, I simply did not expect it to be so worthwhile.

To be clear, Tankard have not returned to their thriving, thrashing, high speed beer-krieg roots as found on the punk splatter of Zombie Attack or the pulse pounding hyper momentum of The Morning After. This is Tankard in sound, and spirit, but it's a polished, melodic Tankard focused very tightly on the delivery of each track. The tone and production are top notch here, enough to compete with most of the higher budget thrash records released after the turn of the century, but most importantly, They've gotten back to what matters, writing excellent riffs and catchy vocal hooks!

Feedback and an ominous cleaner guitar herald the arrival of "Ice-olation", with a similar feel to how Anthrax used to intro their albums back when they were good, but it is quick to shift into some power packed, decently paced thrash metal the likes of which Tankard have developed over the past three records, and the lyrics are as alcoholic as fuck! But even this mighty opener is soon displaced by the excellent "We Still Drink the Old Ways", with its solemn intro and melodic, charging riffs that give it a modern feel, almost like melodic death metal, and the lyrics are all about the drinking traditions of the band's lives! So good it hurts.

Just in case you thought they might get soft, Gerre and his infidels next kick your rounded belly in with the firm, yet still melodic "Forsaken World", another riffing utopia. Did Gutjahr write all of these? Because if so, that man has finally 'arrived'. "Rockstars No. 1" dispels the myths that any naive fan might form about Tankard's image with a rock hard rhythm section and pretty killer breakdown groove, while the acrobatics of "The Beauty and the Beast" deal with the subject of male/female attraction and repulsion...and just how much easier it is all made with alcohol! The last time I've had Tankard kick my ass with five tracks in a row was almost 20 years before this record.

Of course, it doesn't end there. "Blue Rage - Black Redemption" might not be one of the most memorable on the album, but it's indeed solid and features some great lead work above killer rhythm tones. "Frankfurt: We Need More Beer" references a number of earlier Tankard tracks, including "666 Packs", "Space Beer", "Alien", and so forth, to some punky, happy riffs, and "Metaltometal" is an earnest tribute to the band's chosen genre, with a little less cheese than so many other bands who flaunt the medium through a song title. No country, no reggae, it's driving me nuts! "Dirty Digger" has some huge, chugging rhythms that sound fucking monolithic as the lyrics rip down the Western World in all its corrupt capitalism. Closer "Shaken Not Stirred" is no James Bond tribute, but another tribute to the band's still lush lifestyle, dowsed in blazing riffs and dense, angry vocals.

Hearing The Beauty and the Beer is quite a relief if you've been feeling disappointed those many years. Not to write off all the band's interim efforts, for some like Two-Faced and Beast of Bourbon were relatively strong, but this is exactly how I had always envisioned Tankard to sound in the new century, and if they never write an album nearly at this level, I'll still be content that they 'got it up' once more.