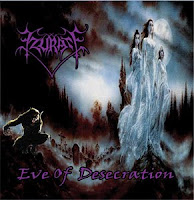 One of the earlier US bands to jump into the black metal market in the 90s, Illinois' Ezurate demo'd about for a few years before finally turning in their debut Infernal Dominatio at the turn of the century. That album was forgettable, the follow-up Blasphemous Hierarchy (in 2007) slightly less so, but it seems with Eve of Desecration they might have finally hit their stride in a balance of aggressive, 90s black metal aesthetics that verify tradition without simply trying to rip off their influences riff for riff. The sound here is obviously being drawn from such sources as Emperor's In the Nightside Eclipse, Dimmu Borgir's Stormblast or Born of the Flickering by Old Man's Child, but you can also hear a parallel to the steady outburst of the Swedish melodic black metal manifested by Dissection, Setherial, Dark Funeral and Lord Belial.

Thus, there is a touch of a graceful and occult Romantic atmosphere to offset the oft blasting mayhem, and thankfully this balance helps the album to escape what could have been its crippling flaw, a 65 minute play length distributed over 15 tracks (four of which are brief intro/interlude/outro pieces). To their credit, Ezurate are older and wiser enough to pack in a scathing enough atmosphere and enough decent (if not exceptional) riffs that I simply could not feel the length of the overall work, though there were few individual tracks which screamed out to me for an instant replay. I would also point out that the band use no 'gimmicks' to cultivate the listener's favor. This is traditional black metal with roots borne straight of the 90s, and a mix that is also comparable, so if you're searching for something exceedingly primal and cult, or overtly brutal and modernist, you are unlikely to find that here.

Like many of the better albums of its breed, Eve of Desecration manages to spit anti-Christian sacrilege forth while conjuring epic mindscapes of archaic ruins, full moon mayhem and an almost oppressive, Transylvanian horror atmosphere behind its rolling woodlands and mist shrouded mountains. However, lyrically its themes revolve around the tearing down of the questionable moral systems that have forever embedded our world in roiling stupidity. Songs like "Creed of the False Prophet", "Salvation Denied" and "The Black Cross of Berziers" revel in their winding riffing patterns and the stock rasping of vocalist Holocausto Inferni, though my personal favorites on this album would be the hellish onslaught of "Overthrown Deity" the plotted elegance of "Invocation of the Seven Gates", and the bleeding black landscape across which the "Metamorphosis of a Lycan" transpires.

Unlike many of its peers, Ezurate does not rely on keyboards to braise the listener in the swell of sinister moonlight. This is a guitar band and almost all layers of atmosphere are created through the forward momentum of the string slinging, without any lack of dimensionality. That they are able to consistently hammer this into your skull for over an hour without becoming a repetitious mess is nothing short of a wonder, though I can't vouch for many distinct riffs that revel in any semblance of nuance. If high paced, traditional, Norse and Swedish melodic 90s black metal appeals to you, like In the Nightside Eclipse, Storm of the Light's Bane or Secret of the Black Arts, then it's likely you will appreciate this USBM band's honoring of the legacy.