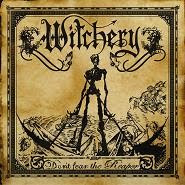 As Symphony for the Devil was such a letdown, it was in Witchery's best interest to lay low for a few years and see if the members could rekindle the black tickers within their hearts. Most of them were busy with other projects at the time, so this was not really a tall order, and when the band returned in 2006 for Don't Fear the Reaper, they did so with all of the members from the prior album, and on a new record label, Century Media, who at this time were already knee deep in trendy, shallow core bands, but still kept a healthy roster of stalwarts in reserve for when their flights of commercial fancy would come to a swift demise.

Lo, I placed this disc in my stereo with great apprehension, but two fingers crossed behind my spine. Surely they would not offer a repeat performance of the lacking Symphony, and return to the severe ass kicking the band was capable of prior to the 21st century, right? Absolutely not! In fact, this is even worse, an uninspiring slab featuring 45 minutes of phoned in, boring riffs and songs that are well below the ability of these five men. The production, of course, is brighter yet than Symphony for the Devil, and the band have incorporated a lot more of a slower, grooving edge which I might add is quite unwelcome, as are the increased use of pure death metal vocals (like in "Draw Blood") that do nothing positive towards the outcome.

Ironically, the album almost gets off to a promising start with the instrumental "Disturbing the Beast". Had it been followed with some kickass track, the slowly building atmospheric mosh boots of this intro might have forged an impact crater on the listener's ass, but "Stigmatized" is quite possibly the worst Witchery track ever recorded, led by a simplistic, juvenile black metal riff that we've heard a thousand times prior, only much faster, and some filler groove riffs which sound like the band just stole half a line from one of their Dead, Hot & Ready tracks to fill space. "Draw Blood" is not much better, a death/thrash tune which follows a similar formula. No surprises lurking around any corner, no killers stalking the night. No pummeling Jensen hook to bait you along! Adding a delay to Toxiene's vocals in "The Ritual" might occasionally make him sound like Ron Royce from Coroner, but it does not assist this otherwise boring groove song.

You've gotta dig pretty deeply into this album to find anything worth a damn. "Ashes" has a nice atmospheric keyboard line, which merges well into the guitars, but they are of themselves not all that interesting, so its up to Toxiene and some gang shouts to save the day. "Plague Rider" and "Damned in Hell" sound like a return to Symphony for the Devil level quality, which is to say...they are average at best, the latter using more of the band's Mercyful Fate-like grooves. Ditto for "Crossfixation". Speaking of the previous album, there is another Egyptian metal instrumental here, "The Wait of the Pyramids", and once again it's probably the best track on the entire album, with some wailing walls of solo that hover over its inbred mysticism. The dull hammering of "Immortal" is quickly forgotten, but "Cannonfodder" and "Styx" fare a little better with at least 1-2 decent riffs each. Another instrumental, "War Piece" is really just an excuse to flex a little blues breaks over some average, chugging pit metal, and

I can only theorize and speak the unspoken, if obvious thoughts that go into such a moot offering: 'Hey fellas, long time no see! I spent about 20 minutes going through some old tapes, and I believe I found at least a few dozen passable riffs we could slap onto a new album. Nothing special, mind you, but good enough for Century Media, and that means a paycheck, right? Head on in to the studio next week and lets churn this out like butter, after all, we've all got better things to do.' Even a cover, or rather 'update' of Satanic Slaughter's "Legion of Hades" can not save Don't Fear the Reaper from middling obscurity (can you really cover yourselves?), and really it presents only a case that Witchery needs a much larger fork stuck in them. Though he wouldn't flee the ranks for years after this, this would be Toxiene's final album with the band, before returning to play guitar in Seance. Can't say that I blame the guy!

Verdict: Indifference [5/10] (a bottomless gorge swallows all in line)