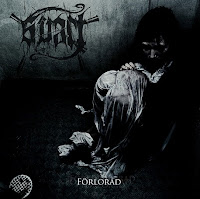 It's unusual how often the 'rule of threes' applies in all walks of life, from the popular media of the book or film trilogy, to the obscure, desolate black heart of Swedish musician Draug, who for the 3rd release now in a row, has offered a sequence of three tracks for his project Svart. With Våran Tid är Förbi, there were three tracks of dense melodic longing and suffering, and upon the more recent EP, a Namnlös och bortglömd, three tracks that ranged from a slower, more accessible melancholic black metal to a piano composition. With Svart's latest album, Förlorad, we are treated to a more minimal, experimental approach than his prior works, a gathering of bleak psychedelic ichor that only skirts the suicidal black ministrations of the past.

I've warned the listener of Draug's past recordings that one must often prepare the appropriate environment in which to best appreciate them, and Förlorad is no exception to this, for its three segments tally up to an astounding 74+ minutes of music, and if using this as a foreground rather than a backdrop, one might quickly tire of the more repetitive tones spattered throughout its mazes of downcast thought and sparse instrumental glare. Based on when and where you hear this record, and with whom, it will either provide an experience of thematic incite or a torturous slog of ennui. I advise you listen to this alone, with something you can drink slowly, while you sit by the docks or riverbed one evening. BUT DO NOT JUMP IN. That is never the answer, unless maybe you are covered with bees or other stinging insects.

"Förlorad I" is the briefest of the three compositions at 14:32, but it sets the tone for basically the entire album. Slow streams of clean guitar tones wash over a simple drum pattern, pausing to ring out or slightly alter their course to give the listener the impression of his/her imminent doom. Within these wisping strings, one can count the drops of blood in crystalline clarity as they weep from an ocean, fresh wound by the tub-side. Or perhaps the slow decay of leaves, first fallen and then devoured by the invisible scourges in the autumn air. It's harrowing music, but extremely simple and arguably monotonous, but transcends well into the second piece.

"Förlorad II", a darker and longer journey into the annals of despair, coming in at over 20 minutes and recounting some of Svart's more metallic elements, with darkly twinging guitars that continue to ring off the bells of black doom that "I" indebted. At long last, the vocals arrive deep within the bowels of this haunting beast, and streams of desperate chords that recount the band's previous releases. I must admit, at around 12:00 this song really takes off into the depths of no return, a downward descent into punishing grief that inevitably manifests in the most crushing riffs on the record (around 16:00). I like the use of the thickly monstrous bass and Draug's distorted groaning.

Funny that we're not even half way through the album, as we've still the nearly 40 minute opus "Förlorad II" to challenge our commitment in hearing this out. This final piece returns to the repeated, clean guitars covering darker tones, as in "I", but there is an enhanced wash of psychedelic effects to differentiate it. This is a fascinating piece, excellent if used at the right time of life, while reading or writing or exploring some craft or art. After all, it's about an album's length in of itself, and offers no bludgeoning shocks quite like "II", but its the most hypnotic, in particular when Draug's nigh audible vocal accompaniment arrives around 20:00 in. Eerie.

Förlorad is a pleasure to listen through in the proper circumstances, but it faces an uphill battle for attention that might turn off fans who wish to hear the band's black metal side as on the debut album Vanära, Vanmakt och Avsmak. Many of these minimal, atmospheric albums often feel like a cheap ploy so that the musician doesn't have to write very much, but here, Draug has clearly metered this material out in such a cautionary manner as to gradually twist back each layer of sanity from the listener, until the soul admits to itself that the day is lost, and perhaps a lot more.