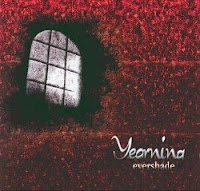 After three pretty great records, in particular Plaintive Scenes and Frore Meadow, my expectations were just about tearing through the roof for whatever the band could pull through the ether next. Sadly, their fourth album Evershade arrived with no fanfare whatsoever. The band was decidedly still a studio two-piece, with just Juhani and T. Kristian from the debut's lineup, and the cover art here was bland and uninspiring, a huge departure from the band's catalog to this point (the debut cover was very 'simple' and natural, but strangely iconic nonetheless). Perhaps all budgets were down the drain here, and the band was struggling to even scrape together something to continue their relationship with Holy Records.

Thankfully, the musical content of Evershade is quite a bit more amusing than its skin. It's subtle and atmospheric, dark and flowing, very much streamlined with the material I so enjoyed on Frore Meadow, if less memorable in the end. This is still moody, morose Gothic/doom metal with a heavy use of keyboards to present string sections and organs over the extremely sorrow choked guitar torments, and a solid, percussive performance from T. Kristian, perhaps his best work throughout all of Yearning's catalog. The tracks are mutually heavy and haunting, and there is no lack of ideas being thrown about to ensure they don't become a perpetual mockery of themselves, a gloom cookie sucking its thumb and slitting its wrist in the corner.

"Aureole" is a great example of an ear-catching but familiar melodic pattern tended with an enhanced atmosphere courtesy of the cautious, measured orchestrations, sure to win the heart of anyone that had been following this band from the debut effort. "Statues Amidst a Frozen Sand of Time" is lush, tense and aggressive as the cascades of wailing guitar melody soar across a wintry landscape of muted crimson and silver audio hues. "Deathbearer" benefits from some fascinating, lurching guitars that surge against more punchy, melodic fills and an overbearing sadness. 11+ minute finale "A Day When the World Started to Weep" is theatrically epic by definition, creating a larger than life scene perfect for the death of any major screen character or conscience.

Yet, it's the odd and perk title track which really stands out on this album. The guitar chords come crashing after the plucky, graceful pre-verse segment, and like so many other tracks on this record, it feels like a slow descent into a drugged state of sadness, or like looking through your regrets through a snow globe. The celebration of melancholy that is Evershade is arguably more consistent than the band's prior works, and as always, pretty original when compared to the vast host of boring, repetitious 'doom' metal acts who empty the purses of fools by simply copping an image and performing hideously boring, awkward music that displays a clear lack of talent and focus (i.e. almost every My Dying Bride/Anathema impersonator on the blue earth).

There are a few tracks here which I didn't find much fawning over, namely "Contemplation" and "Conditio Humana", but even these are rock solid in the context of the overall recording, and thus this is another robust, 50 minute offering the enlightened fan can sit straight through a number of occasions, none the worse for wear aside from having his/her emotions castrated in the most melodic and beautiful of rituals. Yearning was still very much alive by this 2003 period; or rather, prolonging its death by sharing its message of melancholy with those few still willing to tune in.

Verdict: Win [8/10] (wreath yourself to pale and lifeless bliss)