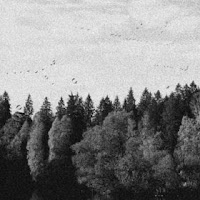 October Falls is superbly done nature-laden black metal, with roaring orchestrations making you feel as if you've communed with Satan to leave your mortal shell behind and become the spirit of a bird of prey, swooping above grand mountain ranges and sprawling forests. The vocals are pretty much perfect, winding about with the fury of the guitar and some very well-done acoustic additions. The album is comprised of three sections of one song titled "A Collapse of Faith," the first two nearing twenty minutes and the piece de resistance at five and a half minutes.
The sounds of falling rain caress your senses throughout, a beautiful backdrop to the relatively simplistic, yet gorgeous musicianship. This is an album that could have went for the selfsame raw and tinny production, but every instrument is clear amongst its counterparts. I can't say this album does much new, but October Falls isn't trying to reinvent the wheel, and nor should they. It's folksy black metal done right, and I enjoyed every second of it.
Verdict: Win [8.5/10]
Posted by JD at 6:42 PM

Amusingly I was just about to post a review of this. Totally forgot it was already up. Didn't enjoy it at all.