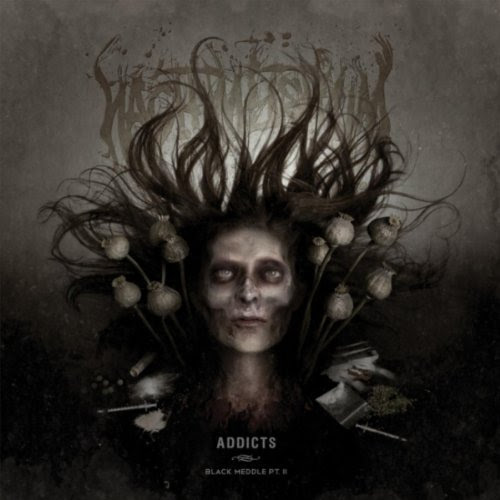 My only familiarity with Nachtmystium prior to this album was their EP from last year Doomsday Derelicts, which is worth more of your time than the 2010 full length Addicts.

Addicts isn't a bad album, rather it suffers from undeveloped ideas and questionable lyrics. The album opens with a nice echoing drum beat. Unfortunately singer Blake Judd spells out a phrase on top of it that is both silly and ruins the ambiance.

The first full track "High on Hate" is a straight forward black metal tune that is a little dull for an album opener. Drummer Charlie Fell blasts away until near the end when they let off the gas. The ending section is a bit more interesting, but not enough to redeem the song.

"Nightfall" reminded me of "Life of Fire" from the previous EP, but without the bite. In both of these songs they've developed a poppy thrash sound draped over the black roots. The better of the two songs is not on the full length.

Things get interesting with "No Funeral," one of the highlights of the album. A wave of trance inspired sound accompanies a mid-tempo drum beat and the resulting rhythm is quite catchy. However they don't push this idea far enough and by the next song they return to somewhat limp-wristed plodding black metal.

The middle of the album is forgettable, but things pick up again at "Blood Trance Fusion." The pun is terrible, but they play with background noises that spice up the sound quite a bit.

The album closes with "Every Last Drop," a ponderous number that threatens to sap every last drop of curiosity in this band. It picks up finally at the 4 minute mark. The latter half of the song features a windy background behind a bending and slow guitar solo. That gives way to nearly a full minute of a repetitious and lackluster electronic outro, unconcerned with leaving a lasting impression.

Nachtmystium have a few different styles that they do well with, and I'd like to see them choose one and explore it fully. I found myself disliking the album more upon writing about it. Anyone curious in the band is better served with the Doomsday Derelicts EP. Otherwise you can skip this one.